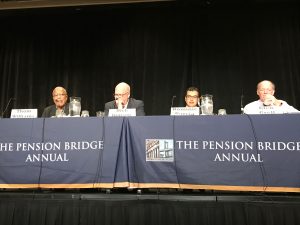 What do Illinois, New Mexico, and Pennsylvania have in common? Badly funded public employee pension plans.

Speaking at the Pension Bridge conference in San Francisco on Tuesday, officials from these pension plans told a crowd of asset owners and managers how and why it happened. Their stories had similar themes.

“Anybody familiar with the term ‘schadenfreude’ means?” asked Illinois Executive Director of the Teachers’ Retirement System Dick Ingram asked, in reference to the German term for delight in the misery of others, such as the criticism his plan has attracted. The executive director of the Teachers’ Retirement System of the State of Illinois then went on to detail how poor contributions have “systematically underfunded” the Prairie State’s program, which is now at 40% of what it needs to pay its obligations.

In other words, his state government hasn’t contributed enough to the plan. “We have never in our 80-year history, in any one year, received from the state an actuarially determined contribution,” he said, adding that his plan is due for a $4.5 billion contribution this year. But the actuarial contribution should be $7.5 billion, he noted. “That in a nutshell is why we are where we are.”

The best-off of the bunch, New Mexico, boasts a 71% funded status, but that is far below what it had a couple of decades ago, when it was overfunded.

“We can never fund that unfunded liability ever based on the structural deficiencies we have,” said Dominic Garcia, chief investment officer of the New Mexico Public Employees Retirement Association.  “For us in particular, you can point to the 1990s.”

During that decade of gangbuster returns, the PERA was 105% funded, and it rewarded its members too well. “We gave out free benefit enhancements without pre-funding it,” said Garcia. “That was mistake number one.”

Following the 2000-03 dotcom bust and the 2008-09 Great Recession, the payouts eroded the organization’s funded status. Compounding that have been New Mexico’s generous cost of living adjustments given to its retirees.

Like Ingram’s fund, contributions have also been below actuarial necessity, for the past 20 to 25 years. According to Garcia, it has received about 80% of what has been owed in yearly contributions.

Glen Grell, executive director of the Pennsylvania Public School Employees’ Retirement System, said his plan’s plight was similar to that of New Mexico. The legislature changed the benefit accrual rate from 2% to 2.5% and made it retroactive without pre-funding it, inadvertently helping swing the plan’s 123% funded status down to 56%, where it stands at today.

After the tech bubble, Pennsylvania lawmakers “systematically underfunded” the plan by changing its structures over the next 10 years. Grell called this concoction the “triple witching hour.” At least, he went on, the contributions are slightly better more recently: They have been paid in full for the past three years. But overall, that amounted to a fraction of what the system needed, he said.

“If you only make partial payments on your mortgage for 12 or 15 years, if you still have your house and decide, ‘OK, I’m going to start making a full payment,’ that’s great, but you still have to do something to make up for that 12- to 15-year hiatus on full payments, and that’s what our policymakers have just been unable or unwilling to wrestle with in Pennsylvania,” Grell said.

As to what they are going to do about the situation, little was said, but the fund runners are trying. Garcia is taking a page out of his former employer, the fully funded State of Wisconsin Investment Board. He wants to take three principles from it: governance, a flexible plan design, and better mechanisms to attract and retain talent.

The state of New Mexico recently created a task force to help deal with its funding issues. Garcia is a member, and is excited for its first meeting next month. The task force was created by legislature following a credit downgrade from Moody’s, which spooked policymakers.

“There are solutions, it’s just, at the end of the day a lot of it is political will.”

“We tried to come up with a concept that would make a defined benefit plan work like a defined contribution plan specifically in the area of investment risk,” he said.

Since the plan achieved its benchmark in the three and six-year periods, there has so far been no need to raise contributions.

“A lot of people in Pennsylvania don’t even know about it because it hasn’t been triggered yet,” he said.

David Eager, executive director of the Kentucky Retirement Systems, another poorly funded establishment, was also slated to be on the panel. But he pulled out at the last minute due to an emergency back home regarding state legislature.