Who are the five best and the five worst state governments in terms of financial health?

Asset manager Conning, in its State of the States report, finds that overall credit quality for the states is stable, although some are at high risk during a recession and their employee pension funding levels remain poor.

Utah, Nevada, Idaho, Colorado, and North Dakota are, in that order, the top states. They show population and employment growth, good balance sheets, and vibrant economies.

Colorado, the biannual project’s previous winner, now ranking at No. 4, still boasts a strong economy and low unemployment, which attracts talent. No. 1 Utah simply did it better, as its population growth has “consistently” outpaced its peers, the report said.

North Dakota wound up knocking Texas down a peg to lock in the No. 5 slot for similar reasons.

Citroen, one of the report’s authors, also said states where housing markets have rebounded, such as Florida, Nevada, and Arizona, have better credits than their counterparts. The laggards are now saddled with problem-laden balance sheets, housing woes, and significant pension deficits that resulted from the 2008 financial crisis.

As for the bottom five, states experiencing the most financial troubles, Conning points to Connecticut (No. 46), Rhode Island (47), Mississippi (48), Louisiana (49), and Kentucky, the anchor man at 50. The first two actually fell from previous rankings, hitting new lows. Connecticut was previously No. 44 while Rhode Island’s rankings decreased 19 pegs due to weak GDP growth, lagging employment, and income increases, plummeting to No. 47 from 2018’s No. 28.

The bottom five are all being hurt by sluggish economies, poor labor and housing markets, and debt. Kentucky’s situation is a little different, as it has also been “dragged down by pension liabilities and few reserves,” the report said. 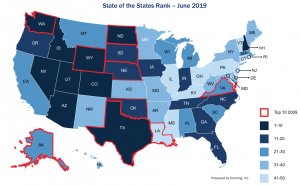 Each of those states bear silver linings, however.

Being one of the richer states, Connecticut has a higher household income growth than others. Rhode Island’s 2.1% one-year home price change, to $275,000 from $269,225, according to the Rhode Island Association of Realtors, is deemed a “strength” by Conning.

The firm also said Mississippi has a “manageable” balance sheet, and Louisiana had strong GDP growth in 2018. Despite its weaknesses in the pensions (just 33.9% funded), Kentucky has seen “robust” labor market growth, according to the report.

“The states that are doing well, they benefit from momentum,” said Citroen. “They’re tax base is growing so they don’t have to increase taxes because they have people moving there…while the states that are seeing people leave, they are burdened by the opposite where they have to raise taxes.”