Bed Bath & Beyond announced a revamp of its board on Monday, which included an independent chair and directors, and the May 1 retirement of Co-Founders and Co-Chairmen Warren Eisenberg and Leonard Feinstein. Patrick Gaston, the current lead independent director, will become the independent chair.

The new board, which is 60% female and 40% minority, will form a committee tasked with reviewing the housewares retailer’s changes, strategy, and structure. It also will launch a new executive compensation model.

The activist investors that pressured the company’s changes include Legion Partners Asset Management, Macellum Advisors, and Ancora Advisors, collectively called the Investor Group. And the group has a shopping cart full of issues with Bed Bath & Beyond’s overhaul.

Its biggest complaint is that Steven Temares is retaining his role as the company’s chief executive officer. The activists said he “must be held accountable for the company’s prolonged poor performance and destruction of shareholder value.” The group has been trying to oust him via a proxy push since March.

The activist group also said the changes lack “any detailed strategic vision for driving value creation at Bed Bath,” and that it will continue its crusade to “install fresh, experienced, and independent oversight and management at the company.”

The Investor Group said the new directors don’t have enough retail experience or the skills to turn the business around quickly. Each has at least four years of necessary experience, according to Bed Bath & Beyond, but the group wants independent directors with “deep retail experience at the highest levels.”

“The company’s track record in identifying additions to the Board in the past does not instill confidence,” the group said in a statement.

Shareholders also were underwhelmed by the revamp. Bed Bath & Beyond stock dropped 4.2% at the end of Monday.  And research from corporate governance and responsible investment solutions provider Institutional Shareholder Services, shows they weren’t happy about his tenure at last year’s annual meeting (CIO is owned by ISS). 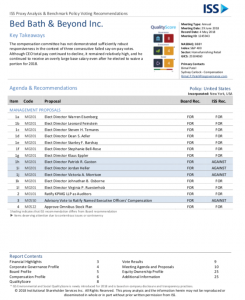 The firm’s governance QualityScore tracker has Bed Bath & Beyond at an eight, which is considered high-risk. 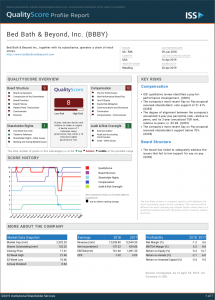 The Investor Group has a 5% total stake in the company. At the 2019 annual shareholder meeting, it nominated its own candidates to the board, including Macellum CEO Jonathan Duskin, whose first order of business would be to hire a new chief.

Bed Bath & Beyond said it has attempted to engage with the Investor Group, and was rebuffed. The company said it is still open to “constructive dialogue” with the group, and is expected to release its new business strategy in the coming days.