The two European grocery chains will expand into the US this summer, but archrival Wal-Mart is already implementing a contingency plan.

Long range investors take note: contrary to the current state of US retail, German grocery chains Aldi and rival Lidl will be adding more than 4,000 stores in the US over the next five years.

Aldi said on Sunday that it will be investing $3.4 billion into the expansion, bringing its US locations up 56.5% from 1,600 to 2,500 by 2022. Of that $3.4 billion, $1.6 billion will go towards remodeling 1,300 existing stores. This will create a total of 25,000 US jobs, putting the company in the number three slot for US grocers. Aldi also plans to add in-house brands and price product at 21% lower than competitors.

For Lidl, the expansion will be the company’s maiden voyage into the US market.  It plans to open the first 10 US stores on Thursday across the Carolinas and Virginia, with an additional 10 openings planned for summer in the same region, creating an estimated 4,000-plus jobs. By 2018, Lidl plans to open 100 stores across the US, stirring up competition with US grocers by pricing products up to 50% lower than its competitors. The company says 90% of its in-store products will be private-label brands that are free of synthetic colors, trans fats, and added MSG. Lidl will continue its American expansion on a regular basis, with analysts expecting between 600 and 2,000 US stores over the next five years. Forbes expects Lidl to match Aldi with 2,000 US stores in 2020.

Speaking of competition, Wal-Mart — the largest fish in the retail pond — is already firing back in the grocery war, spending $6 billion and testing lower prices in 11 US states. By doing so, it is essentially creating a ripple effect that strong-arms its vendors to undercut its opponents by 15%.

Lidl plans to open stores in the following locations this summer: 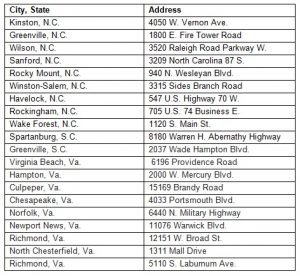