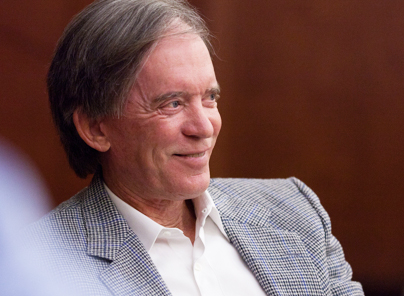 Bill Gross, who starts work at Janus Capital on Monday. Bill Gross, CIO of PIMCO and manager of the world’s biggest mutual fund, has today quit the firm he co-founded in 1971 to join Colorado-based investment house Janus Capital.

In a statement released by Janus, Gross said he was looking forward to “returning my full focus to the fixed-income markets and investing.” He is to take on management of the Janus Global Unconstrained Bond fund from October 6.

PIMCO CEO Douglas Hodge revealed in a statement that “over the course of this year it became increasingly clear that the firm’s leadership and Bill have fundamental differences about how to take PIMCO forward.”

The move has already shocked investors and comes after nearly 18 months of continuous outflows from Gross’ flagship $222 billion Total Return Fund. This week it emerged that PIMCO was being investigated by the US Securities and Exchange Commission over potential transgressions in reporting bond valuations for the flagship’s exchange-traded fund.

Janus is opening a new office for Gross in Newport Beach, California, where PIMCO has been headquartered for 43 years.

Gross’ exit from PIMCO caps a terrible year for the company. Co-CIO Mohamed El-Erian quit in January, and the Total Return Fund has endured 18 months of continuous monthly outflows amid underperformance. Speculation abounds that infighting spurred El-Erian’s departure, despite the creation of a deputy CIO structure.

According to Gross, he resigned in part to escape the managerial burden of his role at PIMCO. “I look forward to returning my full focus to the fixed-income markets and investing, giving up many of the complexities that go with managing a large, complicated organization,” he said.

“I chose Janus as my next home because of my long standing relationship with and respect for CEO Dick Weil and my desire to get back to spending the bulk of my day managing client assets. I look forward to a mutually supportive partnership with Fixed Income CIO Gibson Smith and his team; they have delivered excellent results across their strategies, which deserve more attention.”

In a statement, PIMCO said a succession plan for Gross was in place and a new CIO would be announced shortly. CEO Hodge, who replaced El-Erian earlier this year, said he is “grateful for everything Bill contributed to building our firm and delivering value to PIMCO’s clients,” but that fundamental differences prevented the continuation of the relationship.

“As part of our responsibilities to our clients, employees, and parent, PIMCO has been developing a succession plan for some time to ensure that the firm is well prepared to manage a seamless leadership transition in its portfolio management team,” Hodge continued. “Earlier this year, the firm established a new portfolio management leadership structure that reflects our long-held belief that the best approach for PIMCO’s clients and our firm is to evolve our investment leadership structure to a team of seasoned, highly skilled investors overseeing all areas of PIMCO’s investment activities.”

Related Content: Too Big to (Not) Fail & Gross’ Game Plan for Tackling Vanguard