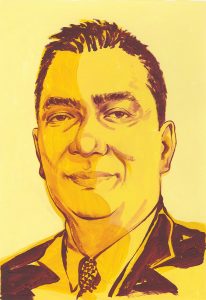 Harshal Chaudhari, the one-time chief investment officer at IBM, has switched over to be CIO at General Electric, where he faces a bigger challenge. Reason: GE’s defined benefit pension plan is underfunded, and IBM’s is fully funded.

A former software engineer and PwC consultant, Chaudhari became International Business Machine’s CIO in 2016. He took the DB plan to more than 100% funded during his tenure, and oversaw a major campaign to de-risk the portfolio.

At GE, its several DB plans totaled $69.4 billion in fair market value as of year-end 2018, which amounts to 75% funded, according to the company’s financial filing. Overall, the company contributed $6.3 billion last year to shore up the pension program, up from $2.9 billion the year before.

In his new job, Chaudhari will oversee the defined contribution program, as well. As GE’s CIO for global pensions, he also carries the title of deputy treasurer and reports to the company’s treasurer, Jennifer VanBelle.

Chaudhari’s appointment comes after new CEO Larry Culp, who took over in fall 2018, made a major step to revamp its financial operations, replacing GE’s chief financial officer in July. Culp succeeded John Flannery, who was forced out after the conglomerate failed to meet financial targets.

At IBM, Chaudhari recently left the CIO’s position to head its artificial intelligence unit and lead its Enterprise Analytics organization. For his work as Big Blue’s investment chief, he last year won an Innovation Award from CIO for corporate DB plans above $15 billion.

He focused on liability-driven investing to hedge the IBM portfolio’s risks and also to enhance its return-seeking abilities. One initiative has been to overhaul the fixed-income portfolio, reducing the reliance on traditional corporate credit.