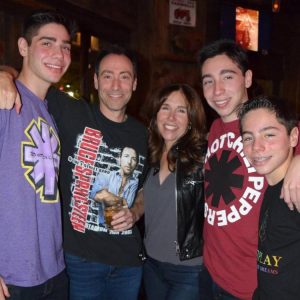 Bruce and Irene Steinberg, and their sons Matthew, William and Zachary.

New Year’s Eve was met with tragedy as Bridgewater Associates lost a senior investor and his family in a plane crash during their visit to Costa Rica.

Executive Bruce Steinberg, his wife Irene, and their three sons, Zachary, William, and Matthew, were travelling in a small charter plane Sunday afternoon when it crashed in the mountains of the Guanacaste region, killing everyone on board.

“The Bridgewater family lost Bruce Steinberg (a senior investor at Bridgewater and a wonderful man) and his family in a plane crash in Costa Rica,” Bridgewater Founder, co-CIO and Chairman Ray Dalio said Monday via his Facebook, Twitter, and LinkedIn accounts. “Right now, we are each processing this devastating tragedy in our own ways. At this time, I will be devoting my attentions to doing this and helping others.”

In addition to being a senior investor at the $160 billion hedge fund, the 50-year-old Steinberg and his family were members of the Westchester Reform Temple and the organizations the UJA-Federation of New York, AJC (American Jewish Committee), and Seeds of Peace. The Steinbergs were also members of the Sunningdale Country Club.

The Temple’s Rabbi Jonathan Blake and Seeds of Peace also mourned the family.

“This tragedy hits our community very hard. Bruce, Irene, and their children have been devoted members of WRT since 2001, and have also been engaged in the wider Jewish community,” Blake said in a Facebook post Sunday evening. “I know there will be much more to say in the coming days, and that so many of us want to do everything we can to express our grief and to show our support for their bereaved family. We will keep our entire WRT congregation and community apprised of any memorial and other pertinent information as soon as we have it.”

“Will was a beloved member of our Seeds family and an active participant in many programs. His parents Bruce and Irene were champions of our mission in their own community as well,” Leslie Lewin, executive director, Seeds of Peace, said in a statement Tuesday. “I think all who knew Will remember his quiet yet strong leadership style, immense kindness, and huge heart.”

“The Government of Costa Rica deeply regrets the death of 10 American passengers and two Costa Rican pilots in the aircraft air crash of the company Nature Air, which occurred today at noon in the canton of Nandayure, Guanacaste,” Solís said in a Facebook post Sunday. “The government expresses its commitment to doing everything necessary to cooperate with the families of the victims in what they require at this difficult time and conveys the solidarity of the entire Costa Rican people.”