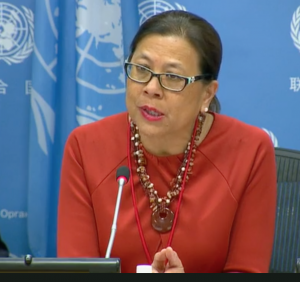 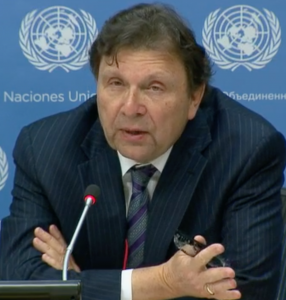 “We all know the capital markets work best when we have honest pricing signals. Currently carbon pollution, which is costing society hundreds of billions of dollars per year, is priced too low, or in some cases not at all. That’s unacceptable,” said Ehnes during a press conference at the Investor Summit on Climate Risk at the United Nations on Wednesday.

According to the World Bank, 85 percent of emissions are still not covered by carbon pricing, but the idea is taking root. At least 42 countries and 25 cities put a price on carbon in an attempt to capture the external costs of carbon emissions–“which the public pays for in other ways, such as damage to crops and health care costs from heatwaves and droughts or to property from flooding and sea level rise–and tie them to their sources through a price on carbon,” according to the World Bank. Instead of dictating who can pollute, carbon pricing uses an economic signal to help shift the burden for the damage back to those who are responsible for it, and gives them a choice whether to discontinue their polluting activities, reduce them, or pay for them.

Countries use a slate of methods, including a carbon tax, which defines a tax rate on greenhouse gas emissions and the carbon content of fossil fuels. A cap and trade system attempts to keep a pre-allocated carbon budget with a capped amount of emissions in a system, and allows low-emitting industries to sell allowances to larger-emitting industries. Indirect methods also include fuel taxes and the removal of fossil fuel subsidies.

CalSTRS and the California Public Employees’ Retirement System (CalPERS) has joined more than 256 institutional investors, with more than $28 trillion in assets under management in Climate Action 100+, an initiative to engage the world’s largest carbon-emitting companies to improve their governance, increase disclosure of climate risks and opportunities, and reduce emissions to be consistent with the 2 degree Celsius target in the Paris Agreement.

Yee, who is on the boards of CalPERS and CalSTRS with a collective $535 billion in assets under management, said achieving the Paris Climate Agreement goals to keep the global temperature below 2 degrees Celsius will require cuts of around 80% of global greenhouse gasses by 2050. It will also require significant workforce transitioning for those in the impacted sectors.

“The corporate engagement focus area of the investor agenda really calls upon investors to step up efforts to press companies in their portfolios to reduce emissions,” Yee said.

Part of the initiative will be to fairly price carbon risk within portfolios. “Financial markets are underpricing carbon risk and very few analysts include any discussion of carbon risk in the reports they send to investors,” said Yee.

With future investments, she said, “governance is very much a key piece as to what we’ll be looking for.” She will also be working toward standardizing transparency and accountability from companies she works and invests with.

“It’s not just a conversation about risk,” Yee told CIO. “There are really lots of opportunities and possibilities with respect with where we put our assets and really make it work for furthering our goals toward a low-carbon economy.”

The two pension funds have used their proxy power to pressure energy companies toward disclosing more information about risks to the environment. CalPERS has made significant investments in large wind and solar projects in California, invested in energy-efficient commercial buildings, and has an ownership stake in the 550 megawatt solar company Desert Sunlight. In FY 2016/ 2017, CalSTRS engaged four oil and gas companies and 15 utility companies to manage methane leaks, which led to the filing of four shareholder proposals asking for improvements in leak detection and disclosure about the repairs. CalSTRS also has committed $2.5 billion to low-carbon index strategy and has made significant investments in green bonds, and has a divestment plan from thermal coal holdings.

Ehnes said it is up to asset owners to make sure lawmakers understand the “business case” for clean energy and reduced emissions at the state and national level, and to implement and expand upon the Paris Agreement.

He noted California has taken critical policy steps to move the agenda forward by extending the cap and trade system to 2030, enacting aggressive building and appliance efficiency standards and low-carbon fuel standards, creating incentive for zero emission vehicles, and creating policies to reduce climate pollutants like methane and black carbon.

After the conference, Yee told CIO, “I just saw a deep commitment from all sectors to do what they can. I hope we can work in coordination and in partnership because there is such a sense of urgency to get this done.  We need to engage companies in a very strategic way, and make sure we are using all of the tools in terms of getting good disclosure, and we’re using all of the research tools that we have in terms of evaluating climate action plans.”