In its first five-year report since adopting a funding plan that’s expected to divert its portfolio from the threat of insolvency, the California State Teachers’ Retirement System (CalSTRS) outlined pre-emptive measures that could help the system remain on course.

The plan was adopted in 2014 and is expected to help the pension reach a 99.9% funded ratio by 2046 rather than the previously projected insolvency status by that time. And although everything is working out as planned so far, staff at the pension stressed the importance of being nimble and aware to the three major risks to their plan: longevity risk, risk of declines in membership, and investment risk.

Part of the solution was to allow staff at CalSTRS to adjust contribution rates from beneficiaries, albeit to a certain extent. For the third year in a row, CalSTRS opted to use its discretionary authority to increase contribution rates by 0.5%.

“Acting quickly will be key since providing additional contributions soon after a period of negative investment returns would improve the likelihood that CalSTRS is able to buy in at the bottom of the market and enjoy appreciation in asset values sooner,” the report reads.

In a simulation where CalSTRS staff were hypothetically allowed discretionary authority to increase contribution rates following the 2008 financial crisis (where the funded ratio dropped nearly 40%), if rates had been adjusted by 1% per year for employers and 0.5% per year for the state immediately following the market crisis, the system would be in a stronger financial position today, funded at about 70% rather than 64%.

The below graph illustrates the theoretical progress: 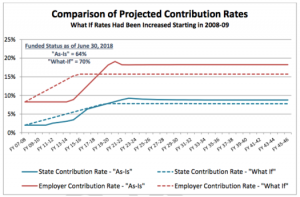 Meanwhile, the world’s largest educator-only pension plan is also tackling a number of ESG issues such as carbon pricing and battling the US’s opioid crisis.