“Despite positive economic indicators of a healthy Canadian economy, depressed energy and commodities were amongst the poorest-performing sectors to drag on domestic equities,” said James Rausch, Head of Client Coverage, Canada, RBC Investor & Treasury Services, in a statement. “Nevertheless, Canadian pension fund managers have continued to prudently manage portfolio allocations, remaining underweight in Canadian equities compared to domestic fixed income and global equities, and generating yet another positive overall return for the quarter.”

Since the beginning of the year, oil prices have fallen more than 15%. However, oil reserves remain above average.

Global equity returns receded from their 6.2% showing in Q1, dropping to 2.3% for Q2. Stocks were stable following positive global economic data, which includes healthy quarterly earnings in addition to signs of recovery in Europe.

The same can’t be said for the US. Slim growth numbers, political risk factors, considerations that the recovery in most equities is approaching its natural ceiling, and  the MSCI World Index’s fall from 5.8% in Q1 to 1.3% in Q2 2017 contributed to the poor picture.

Canadian fixed income returns again saw a 1.4% gain as they continue to rise above Q4 2016’s 3.14% fall. According to the RCB Investor & Treasury Services, this was against “a general backdrop of weakness in global bond markets, as central banks increasingly consider calling time on stimulus packages and preparing the ground for possible rises in interest rates, prompting a slight bounce in bond yields in anticipation of a move in that direction by the Bank of Canada.”

In addition, the FTSE TMX Universe Canadian bond index gained 1.1% for the quarter.

The RBC Investor & Treasury Services tracks $650 billion of assets under management. The performance chart for the past two years can be viewed below. 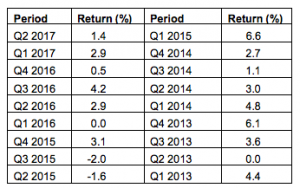