Canadian defined benefit pension plans returned 2.7% for the second quarter of 2019, according to the RBC Investor & Treasury Services All Plan Universe. It was a healthy quarterly gain, but not as stellar as the first-quarter returns of 7.2%. However, despite the sharp quarterly decline, six-month returns were a robust 10.2% for the plans.

“The first half of 2019 has been positive for Canadian defined benefit pension plans and all indicators show that the Canadian economy is healthy,” Ryan Silva of RBC Investor & Treasury Services said in a statement.

However, Silva added that there were “small cracks” beginning to appear in the Canadian economy as geopolitical and trade unrest, and slowing global economies continue to persist.

“Second-quarter growth can be considered healthy, but modest,” said Silva, “and managers will need to maintain their cautious approach and actively manage their portfolios and risk exposure.”

Canadian equity returns for Canadian pension plans were also tempered during the second quarter, returning 2.3% compared with 12.4% for the previous quarter. 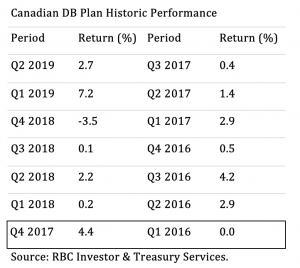