The investment returns for Canadian defined benefit pension plans edged higher in the first quarter of 2018, but decelerated from strong gains reported during the last quarter of 2017, according to the $650 billion RBC Investor & Treasury Services All Plan Universe.

“The first quarter of 2018 was full of instability and volatility, with Canadian equities taking the biggest hit,” Ryan Silva of RBC Investor & Treasury Services said in a release. “The healthcare and energy sectors, uncertainty around NAFTA trade negotiations, as well as potential interest rate hikes weighed down the TSX Composite Index and other key indices,” he said, adding that “geo-political concerns, coupled with international trade and interest rate anxieties also impacted global equity returns.”

Returns for Canadian defined benefit pension plans rose 0.2% during the quarter, compared with gains of 4.4% during the fourth quarter of 2017, and returns of 2.9% during the same period last year.

The Canadian dollar was the worst-performing major currency during the first quarter, during which time the US dollar appreciated versus the Canadian dollar by 2.9% due to the uncertainty around trade talks, and its impact on the Canadian economy and monetary policy, according to RBC. 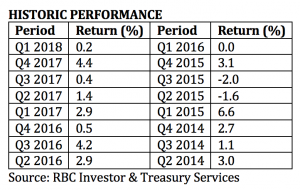