The one-year return was 6.14%, which is just below the Canadian Master Trust Universe’s 10-year annualized return of 6.17%. It also reported three- and five-year annualized returns of 7.4% and 9.8%. respectively. The BNY Mellon Canadian Master Trust Universe is a fund-level tracking service that consists of 87 Canadian corporate, public, and university pension plans that have a total market value of more than $232.8 billion, and an average plan size of $2.7 billion.

The top-performing asset class in the third quarter was Canadian equities, which reported a median return of 3.4%, and international equity was the best-performing asset class over the one-year period with a gain of 14.74%. Meanwhile, fixed income’s third-quarter and one-year returns underperformed, with median losses of 2.01% and 3.01%, respectively. 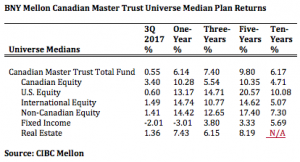 Canadian large-cap equities posted the highest median results for the quarter, rising 3.9%, which surpassed the S&P TSX Index by 22 basis points. Median returns from Canadian long-duration fixed income (-4.03%) and Canadian government bonds (-1.78%) were underperformers in the third quarter, according to BNY Mellon.

Alternative asset classes were led by real estate, which had a median return of 1.36%, followed by private equity, which gained 0.52%. Infrastructure was up 0.42%, and hedge funds declined 0.92% in the third quarter, as reported by the Asset Allocation Trust Universes.