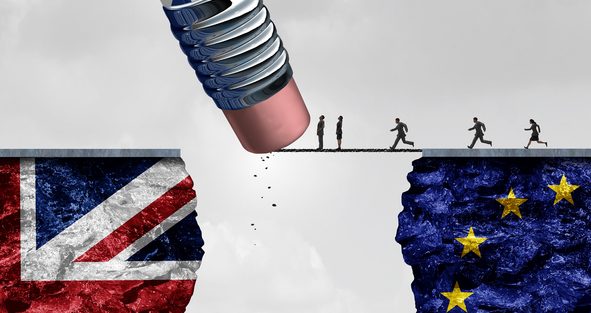 CEO says Brussels may wield too much influence, and also warns Fed may unwind QE too fast.

JP Morgan Chase CEO Jamie Dimon warned that following Brexit, the European Union (EU) can “dictate” whether jobs can stay or be moved out of London during a speech at the July 12 Paris Europlace International Financial Forum.

In his speech, he also said that JP Morgan is proposing to move several hundred employees to Europe as Brexit talks intensify. In addition, the US bank’s London employees may be uprooted. The figure was originally estimated at one-quarter of the London staff, but Dimon is now unsure, as Brussels will have the final say.

“We have 16,000 people in the UK, but 75% of that is servicing EU companies, and if regulators say one day, ‘we’re not comfortable with your risk people, your lawyers, your compliance being in the UK,’ they can make us move it,” Dimon told Sky News. “We will simply be subject to what they do down the road. What happens next is totally up to the EU, it’s not up to Britain.”

As the UK’s departure continues, financial institutions such as Citibank have been confirming early plans to shift work into other EU cities, such as Paris and Frankfurt in order to maintain their links. There are currently 23 major firms with contingency plans in place, according to EY Financial services. According to Business Insider, Japanese bank Nomura is applying for a license to operate its EU base in Frankfurt post-Brexit.

Dimon said that in the Brexit aftermath, most of JP Morgan’s EU activities can be handled through its operations in Frankfurt, Luxembourg, and Dublin—where the bank is buying a landmark office block that could double its current staff in Ireland’s capital.

He also expressed concerns over the decision by the Federal Reserve and other major central banks to unwind their multi-trillion-dollar bond-buying programs, which Federal Reserve chairwoman Janet Yellen reiterated Wednesday, when she testified before a house panel. She is expected to again reiterate the decision today before the Senate Banking Committee.