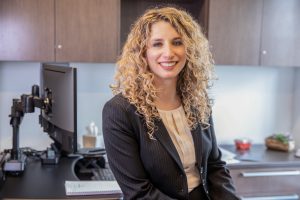 The former CIO NextGen and 2014 Forty Under 40 achiever will leave Parkwood, a family office, after nearly 12 years to join the new Cleveland-based family office founded last year by father and son entrepreneurs, Shelly and Joel Adelman.

She is AdCap’s first CIO.

“It’s really exciting to be a CIO because I get to look at the whole portfolio,” she told CIO. “I find it really interesting to think about how the different asset classes and strategies work together to create a high-quality, robust portfolio that can navigate through market volatility.”

Slain, who ran Parkwood’s hedge funds, said the Adelmans’ entrepreneurial approach allows and encourages her to maintain a “creative and independent investment style” as well as being open to some entrepreneurial sources of returns. “It’s a tremendous opportunity,” she said.

Slain’s announcement makes her the second NextGen who has crossed the CIO bridge in the past 12 months. The first was Jenny Chan, who became CIO of the Children’s Hospital of Philadelphia last August.

Since NextGen launched last year, one-fifth of its inaugural class has now seen a promotion.

“I think allocators need to look at every element of their structure, such as size, and governance to determine how to play to their strengths while managing around constraints,” she said, adding that there are always ways to design winning strategies around an investor’s unique structure.

CIO NextGen replaced its Forty Under 40 list, taking 25 non-CIO standouts from the asset owner world under age 50 who were nominated by current institutional leaders and innovators.

In her NextGen profile, Slain’s previous boss, Parkwood CIO Jonathan McCloskey, called her a “smart and tenacious” analyst as well as a “multi-dimensional thinker.”

“While skilled in the technical aspects of investing, she excels in understanding the soft stuff—which is crucial,” McCloskey said. “In addition, her willingness to express an opinion allows her to stimulate conversation and counter group-think among the team.”

Joel Adelman was the former CEO and founder of payroll funding platform Advance Partners, which was acquired by Paychex in 2015.

“Since founding AdCap last year, I’ve been interested in diversifying my portfolio through less conventional investments,” said Joel Adelman. “Chaya brings a wealth of experience and access to AdCap, and I’m especially excited about her entrepreneurial spirit. Together, we’ll achieve exceptional results.”

« At Morningstar: Asness Has No Simple Answer to Quant Strategy Losses