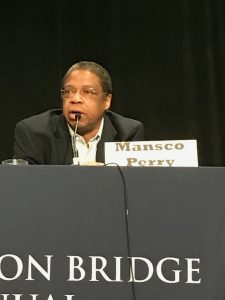 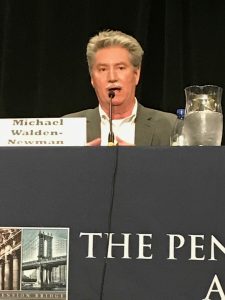 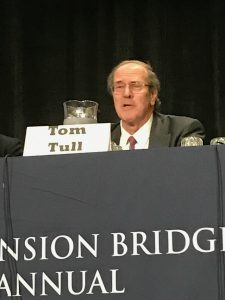 For a good chief investment officer, some topics just never get old. Like: 1) passive vs. active investing, and 2) their most worrisome problems.

During the final panel at the Pension Bridge conference in San Francisco, Tom Tull, Michael Walden-Newman, and Mansco Perry III were asked about these key topics centered on how they handle their funds’ money.

“We’re about two-thirds passive in the equity space,” said Walden-Newman, who runs the Nebraska Investment Council’s money. He then detailed his “blank sheet” approach to building a portfolio: “We really deconstruct the portfolio and build it back up.”

Everything is on the table. The approach is to “start with the premise that we don’t have asset class X in the portfolio and ask the question ‘do we need it and how?’” he said. “Once we have that structure set, then we find the managers. We do that in-house, without a consultant.”

The fund originally was two-thirds active. Now it uses indexes for US stocks and active strategies for global equities.

Perry, the CIO of the Minnesota State Investment Board, also reshaped his now-$40 billion public equity portfolio in that direction. He said that three years ago, it became “passive happy.”

Before then, “I had been a very strong advocate of active management until I had the time to go back and look at about 40 years of our history,” he said. Today, the stock portion of the portfolio is 70% passive.

He said the larger the portfolio became, the more he realized the fund had been setting up a “very expensive index fund,” with active managers who tracked benchmarks but charged much more than indexes do.

Tom Tull, CIO of the Employees Retirement System of Texas, said he opts for active funds when seeking “areas where we can outperform.” Those include funds that invest in international markets like Japan and in small- to-mid-cap US companies. The fund has added 10 small-cap international managers within the past 12 months and is likely to eventually add emerging managers that complement what they’re doing.

“If you are blessed to have an internal group” that can do better than indexes, “it makes sense to generate that active performance,” he said.

As for what keeps them up at night, Tull pointed to the political side of his job. He cited outside requirements concerning “what countries you can invest in, which countries you can’t invest in.”  That results in “unintended consequences,” he said. “A lot of it can be detrimental to the bottom line of our rate of returns.”

Walden-Newman said he faces no such external pressures as long as he beats the benchmark, which the plan achieves. “With that difference, the legislature is actually on my side,” he said.

Attracting and retaining talent is a struggle as compensation is not always high for a public plan. “I’m afraid that I’ll show up to work someday and everyone 45 and under has left and gone to work somewhere where they can have more money,” Walden-Newman said, adding that the legislature sets the budget for what state employees take home. “Everybody likes Nebraska because it’s just a fantastic place to live, but that’s not enough when they deserve to be paid what they’re worth.”

Perry said he had a similar situation to Nebraska’s. Nevertheless, he indicated that he tries to have a laid-back approach to it. “I get aggravated about some things, but most things are completely out of our control,” he said. “What keeps me up at night? The Red Sox winning and the Yankees losing.”

The three investing pros were also joined by Utah Retirement Systems CIO Bruce Cundick, who requested his answers be off-record.