Climate change, trade collapse, and cyber warfare are among the top risks for investors, according to Willis Towers Watson’s Thinking Ahead Institute.

The organization worries these and 27 other risks are the ones to watch, according to its Extreme Risks 2019 report, which ranks the top 15. Others, such as alien invasion, cosmic threats, or natural catastrophe, did not rank as the organization does not view them as likely to happen as others. The last time the report was published was 2013.

Thinking Ahead fears global temperature change the most as the past six years have seen the world keep emitting more greenhouse gasses “that exacerbates the risk of rising global temperature.” Warming has risen two spots since 2013, when it ranked third. Thinking Ahead’s report says climate change is “looking increasingly likely, suggesting it might need to be considered as a mainstream risk.”

Global trade collapse is another significant investor worry, which the organization says has peaked because of the rise  of protectionism.. The growth of wealth inequality, leading to a decline in living standards for blue-collar workers, is also cause for concern.

“While Trump and Xi may be in the headlines, we think that there are deep historically-rooted drivers that make large sways of populations antagonistic to the logic of free trade and the movement of jobs to countries with comparative advantage,” Tim Hodgson, the institutes head, told CIO.

As the internet becomes more widely used for everyday tasks, Thinking Ahead also notes that there are growing concerns of it being weaponized, adding to potential cyber risks.

“Cyberwarfare scares me witless,” Hodgson said, noting that while it’s “a pain” to have your identity or credit card information stolen, the branch of this threat that he fears the most is a potential nationwide cyber-attack.

Hodgson pointed to recurring annual cyber-attacks that have been occurring in the Ukraine each December for the past several years, taking out the nation’s power grid. “Each year it’s more sophisticated, and each year it takes longer to fix and the power outage hits a wider area and is longer,” he said, adding that the technology running the Ukrainian grid might also be used to run the US grid. “The extreme risk is not really your credit card details being stolen, but actually nation-state cyber warfare.”

To mitigate the risks, Thinking Ahead’s research suggests three hedging strategies: hold cash, as it has held its real value over long historical periods through both inflation and deflation; use derivatives, and hold a negatively-correlated assets.

The organization also suggests investors prioritize the risks and diversify their portfolios.

The full list of the top 15 investor risks is below. 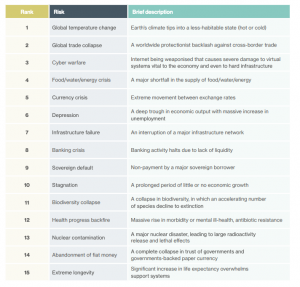 The US Owns Most of the World’s Retirement Assets

Millions at Risk of Falling for Pension Scams

« Former Adviser Gets Nearly 6 Years in Prison for Fraud