US corporate pension plans saw their largest growth year-to-date in September with a $26 billion increase in funded status, raising their funded ratio to 84.3% from 83% during the month, according to consulting and actuarial firm Milliman.

According to Milliman’s most recent Pension Funding Index (PFI), which analyzes the 100 largest US corporate pension plans, the deficit fell to $272 billion due to interest rate and market value gains in September.

“While September’s positive performance is welcome news for these pensions, it’s tempered somewhat by the recent release of the new mortality tables by the IRS,” said Zorast Wadia, co-author of the Milliman 100 PFI, in a statement. “Much of the fourth quarter will be spent in anticipation of how the new regulation will affect 2018 cash contribution funding, PBGC premiums, and de-risking efforts.” 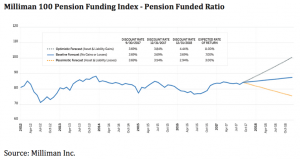 The Milliman 100 PFI asset value grew by $6 billion as a result of September’s 0.78% investment gain to $1.465 trillion, with cumulative year-to-date investment gains of 8.34%. In contrast, the 2017 Milliman Pension Funding Study reported that the monthly median expected investment return during 2016 was 0.57%, or 7% on an annualized basis.

For Q3, Milliman reported that the funded status of the 100 largest US corporate pension plans improved by $13 billion, primarily due to September’s gains.