Like many of its industry’s mega-funds, the private equity conference was oversubscribed. “Sorry, press RSVPs are at capacity for tomorrow. Thanks for your interest,” was the cursory email from the conference organizer. But on the event’s program—readily available online—a session promised to parse the question on many investors’ minds: “Private Equity Boom or Bubble?”

Though fundraising slowed in the first three months of 2015, last year was something of a banner year for the private equity industry. Exits from buyouts topped $450 billion—a record, according to Bain Capital’s “Global Private Equity Report.” Preqin reported fundraising hit nearly $500 billion as private equity and venture capital assets under management soared to a never-before-seen $3.2 trillion as of June 2014. Cash flooded the market, though mostly to top-tier funds, and “dry powder”—investor capital that has yet to be deployed—hit an all-time high of $1.2 trillion in December. Valuations soared.

So does this hyper-competitive environment awash with much more money than opportunities typify a bubble ready to burst? And where will that leave limited partners (LPs) such as pension funds, foundations, and endowments?

While a panel of experts presumably debated this behind closed doors, an informal poll in the lobby of the Art Deco hotel with Central Park South views revealed no one wanted to utter the b-word. There were substitutions like “tension” and “looking long term.” “You have to think differently,” concluded one executive. 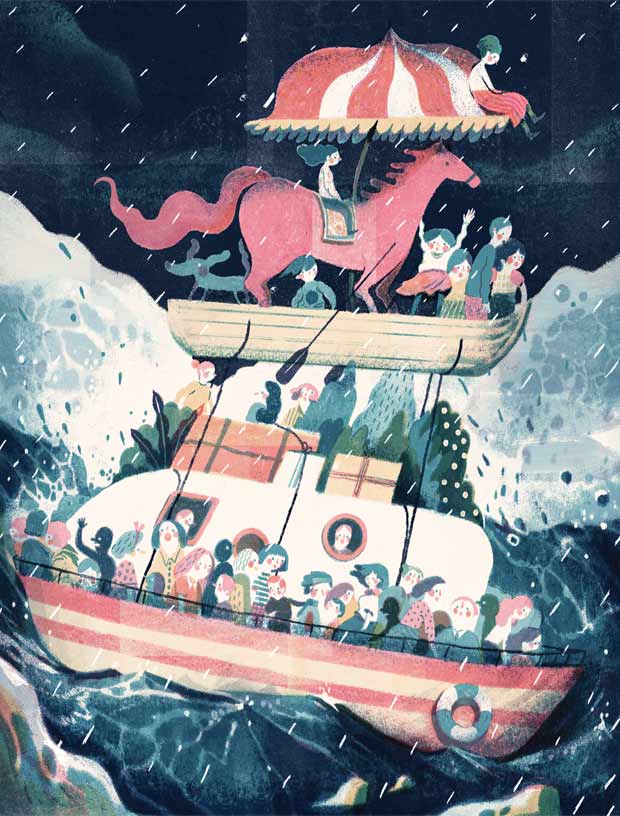 Art by Lisk FengFor asset owners, it means acting even more measured in a market that already requires prudence. The consequences of private equity as a long-term investment can be complicated, they say. For one, it is nearly impossible to undo a bad buy decision. In any economic climate, the fact that you can’t just liquidate your portfolio without taking a significant haircut has to be a factor when committing capital for 10-plus years—as, many an asset owner points out, it should be.

“Bubble implies no underlying asset value,” says Jonathan Grabel, CIO of the Public Employees Retirement Association of New Mexico (PERA). “Private equity is super efficient. It has been a great five-year stretch—some would say even longer—and interest rates are moving in one direction, and that is a great environment to make private equity investments.”

Yet Ben Cukier—who spent 16 years at FTV Capital before leaving in January to start Centana Growth Partners—says that some recent deals do have him perplexed. “Is the stock market in a bubble or is private equity just overpaying for everything they buy? My personal opinion is that there are a lot of people paying prices I wouldn’t pay for assets, but there are lots of assets still trading at good prices.”

“I would not say it’s a bubble,” says Karl Scheer, CIO of the University of Cincinnati. “That’s sort of inflammatory or provocative, but certainly there is frothy pricing.”

“Bubbles are defined by when they deflate, and I wouldn’t expect to see a violent deflation from these levels anytime soon—barring some sort of material catalyst,” he adds. “So while the environment may feel very overpriced, it doesn’t feel like a bubble to me and I don’t really anticipate attractive prices to appear anytime soon.”

Most say that the current setting is an attractive one for general partners (GPs) due to the voracious demand from LPs to commit capital, with top-tier firms able to raise money effectively overnight. “The timing of these fundraisings does stick out to me,” says Grabel. “GPs can close in a matter of weeks on not just permanent capital, but a vehicle that is 10-year-plus capital. People are willing. That asymmetry is a bitter pill to swallow. It’s somewhat mitigated if you have an existing relationship or were in a prior fund, but for a brand new relationship, that’s tough. That is something that we as LPs should all be aware of.”

“People have an innate deep-seated inability to separate the price they are paying from the return they expect,” says Scheer. “They think high price equals high returns. If a manager gave discounts—instead of 1-and-20, a .25 and 10 carry—people would have a hard time not saying, ‘You’re telegraphing low returns.’ It’s almost like wine—‘I believe it’s better because I am paying more.’”

Fifty-one percent of vehicles closed above their targets last year, according to a 2015 report by Preqin. To find a distinctly bullish feeling, couple that with 46% of investors reporting being below their target allocations, up from 39% in 2013 and 28% in 2012.

“The conversation should maybe move from whether
or not we are in a bubble to private equity should be viewed as a discrete asset category.” —Jon Grabel“We’ve had a hard time finding attractive opportunities in the last three years,” continues Scheer. “Private equity is a very hard place to make money. You have to nail it pretty much every time. It is easy to have one investment foul your portfolio. We haven’t seen a tremendously huge number of managers that stick with strategies and asset classes and that is hard for us. We have turned down more groups in the very last moment than any time in our career,” he adds.

Cukier still sees a lot of opportunities to deploy cash in deal- and sector-specific areas—and to be wary of others. “It’s hard to generalize. Sometimes I scratch my head and think, I don’t understand. In certain sectors, especially in the venture markets of Silicon Valley and Silicon Alley, the valuations and attitudes have reached 1999 levels. But then there are some hearty tech companies in the Midwest that are not trading at absurd levels relative to long-term averages. But are some deals ridiculous? Yes.”

Grabel describes New Mexico PERA’s methodology like so: “The way that we are approaching private equity is that we are trying to ever-diversify our portfolio by geography, strategy, industry sector, and by stage—because our portfolio is dominated with brand-name, core, private equity managers,” he says. “My personal bias is that the core of private equity, the mega- to large fund, is the highly efficient asset category.”

Scheer sees a market that is bifurcated between extremely competitive fundraising, and those taking a year or two—and then not getting as much as they want. “The smaller group, $500 million to several billion, has a constrained amount of capital to raise, and LPs are clamoring to get in because of track records. They can’t write big checks or accept them.”

Speculating whether or not there is a bubble in the private equity market is the same as trying to do so in the stock market or real estate. “Across any and all asset categories, there are things that are more efficiently priced than not,” says Grabel. “The conversation should maybe move from whether or not we are in a bubble to private equity should be viewed as a discrete asset category. Are the underlying characteristics of that equity risk familiar, and is that similar or uniquely dissimilar than more traditional equity?”

“The way we have looked at it, and staffed internally, is that we have the same people looking at public, private, and long/short because at the end of the day the underlying risk factor is equity,” the investment chief continues. “The investment vehicle is a lesser differentiator. The industry is so sufficiently big that maybe it is time we suspend disbelief and not view it as a separate allocation but more part of a holistic view of equity writ large.”

Observers on the whole are amazed at the stickiness of private equity’s 2% management fee. “It was one thing when funds were a couple hundred million dollars and you needed to run a business. It’s another when the assets are in the tens of billions,” says Grabel.

The compensation model gives GPs incentive to think about money and valuations in a longer-term metric than others, says Centana’s Cukier. But on the flipside, “you have these mega-funds where the management fee starts driving a lot of economics.”

In the bifurcated market Scheer describes, LPs don’t have much fee power in the high end—although he believes that it is changing at the bottom end. Some asset owners view a co-investment program or separately managed account as a way to have more control and reduce management and carry fees. Based on this interest, more than half of the GPs in the Preqin report said they are aiming to increase their co-investment offerings.

But Grabel doesn’t believe it’s the “magic bullet” that some others do. “In some sense, I think that makes a concentrated portfolio that much more concentrated, which can potentially increase volatility of the outcome. I don’t know if most asset owners have the necessary skill to do the due diligence and make the decisions that private equity firms make. A fee-driven motivation in co-investing isn’t the right motivation.”

When Cukier started his first job in private equity in 1997, the head of the firm gave him an article from the New York Times about the industry’s imminent decline thanks to a falling rate environment, excess capital being raised, and a plethora of new market entrants.

“I don’t believe private equity as an asset class is anywhere near its end. But when the market falls dramatically,
as history suggests at some point it will, some people will be hurt by it.” —Ben Cukier“I read it and I was horrified,” he recalls. “What business did I just get into?” Then he saw the dateline—it was written in 1982. The death of private equity has been foretold many times.

“That being said, rising rates decrease asset values,” he says. “It’s Economics 101. As the cost of capital goes up, the value of properties decreases. To me, the market evolves much as it always has. Some will be washed out and some players will thrive. Much like what happened after 2008, the capital will pursue the winners and continue to be allocated. I don’t believe private equity as an asset class is anywhere near its end. But when the market falls dramatically, as history suggests at some point it will—I can tell you direction or timing but not both—some people will be hurt by it.”

There is even one commonly expressed view that the current boom is happening because the private equity market has become a proxy for going public. There is enough liquidity to make it more efficient than it used to be, and there are fewer regulatory burdens to an initial public offering than there once were.

“It is not a symptom of a bubble per se, but because of some of the inefficiency of the public markets,” Cukier says. “If you believe the theory that the private equity market is becoming a replacement for the public equity market, it actually has a long-term raison d’être.”

“Private equity is always cyclical, and the vintage year is very indicative of your returns,” says University of Cincinnati’s Scheer. “The other idea is that the KKRs and TPGs of the world have a real incredible ability to avoid realizing bad returns, because they control the timing. They have a pretty amazing ability to avoid the pain.”

Let’s hope they aren’t the only ones, and that asset owners have partnered with the right GPs in the currently crowded field—come rain or shine.