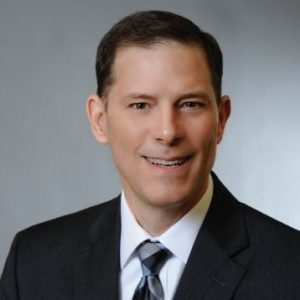 The strategy recommended by its consultant Meketa and subsequently approved by the board is mostly founded on the principle of increasing the portfolio’s beta to traditional equity while significantly decreasing its private markets holdings.

“We want to improve fund liquidity and shift our growth engine predominantly to the public equity markets,” Custer told CIO.

The total fund’s performance clocked in at -0.4% (2Q18), 1.3% (trailing one-year), and -0.1% (trailing three-year), respectively, according to the most recently issued report dated June 30,, 2018. The fund is less than 50% funded, significant illiquid, and receiving lower than projected contributions, with a roughly equal ratio between active to retired participants.

Custer and his team intend to fully liquidate the plan’s private infrastructure and private debts holdings, and partially liquidate its holdings in private natural resources, as well as a host of other initiatives to help attain an average 7.25% per year. Meketa’s October 2018 analysis of the impact on the manager roster of implementing the proposed asset allocation includes the following summary: 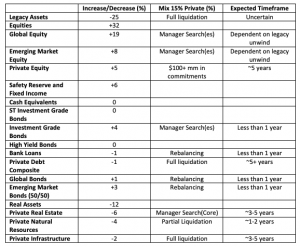 The system will lower its exposure to private markets through “a natural process driven by fund or asset managers as the underlying assets mature,” Custer told CIO. “Mature assets are being marketed and sold at fair market value. DPFP has adequate liquidity and we don’t anticipate discounted transactions or utilization of the secondary market.”

Custer was named CIO in July 2018. He replaced James A. Perry, who resigned in July 2016 to join Maple Fund Services. Custer previously served as CIO of the College Illinois prepaid tuition program, and as a senior investment officer at the Illinois Teachers’ Retirement System.

Since joining the Dallas team, it’s been “a busy few months with a new board, consultant, and CIO reviewing the fund and implementing a new asset allocation, implementation plan, and investment policy,” Custer said. “Looking forward, I expect and hope that 2019 will be relatively boring.”

Private Markets Portfolio
The DPFP outlined how it expects the private markets portfolio to be transformed over the next several years.

Actual sales and distribution activity tallied at the end of 2018 was lower than projected figures from its February 2018 board meeting. “Mostly this is just timing,” Custer told CIO. “It is important to note that these are rough projections and not goals.”

A breakdown of the plan’s private markets activity from its January Private Asset Cash Flow Projection Update report can be seen below: 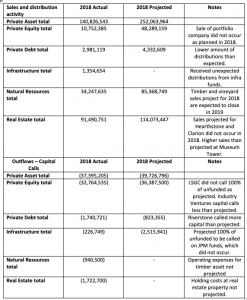