The consolidation trend in the Netherlands’ pension sector is causing the number of Dutch pensions to dwindle from more than 1,000 20 years ago to just 268 today, according to De Nederlandsche Bank (DNB), the central bank of the Netherlands.

The sharp decline mostly involves company pension funds, which have fallen by approximately 70% over the past 10 years to 192 as of June 30, from 605 at the end of 2007. Meanwhile, over the same time period, the number of industry-wide pension funds fell by about 40%, to 59 from 96.

The bank also said that the decision by pension funds to liquidate or merge are mostly driven by a host of multiple converging trends. These include the rising cost of pension administration, increased tightening of statutory requirements, difficulty finding suitable board members, the fund’s financial position or demographic composition, and developments at the employer, such as mergers, company failures, or pension adjustments. Many pensions also decided that consolidation could also help to achieve economies of scale.

The bank said that earlier this year, it identified a group of 22 pension funds as highly vulnerable. 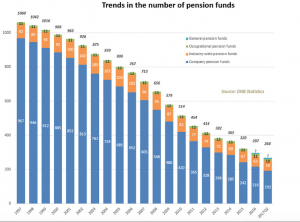