Consolidation, insourcing, and de-risking by major institutions took tens of billions of dollars out of the hands of asset managers in the past five years, according to research.

The analysis of investors in Europe and the Middle East by UK consultant Spence Johnson showed sovereign wealth funds (SWFs) pulled more than €45 billion ($50 billion) from segregated mandates during 2015.

“SWFs in the Middle East were responsible for strong inflows up until 2015 when a renewed ambition to build internal asset management teams, coupled with falling oil prices, lead to many funds pulling assets to shore up fiscal deficits,” the consultant reported.

In the Netherlands, regulator-driven consolidation has meant the largest pensions now manage the majority of their assets in house, including ABP and PFZW, two of Europe’s largest funds.

Meanwhile, the UK’s leading role in the development of liability-driven investing (LDI) meant managers of high-risk asset classes such as equities had lost out to fixed income providers. LDI managers have gained net inflows of €194 billion between 2013 and 2015, Spence Johnson found. In addition, “unconstrained” fixed income strategies saw a record annual net inflow of €12.8 billion during 2015.

Separate research from Mercer published this week indicated a continued shift out of equities from European investors. A fifth of institutions surveyed for the consultant’s asset allocation report said they expected to cut exposure to domestic equity, while 14% said they planned to cut overseas equities. Index-linked government bonds and “other matching assets” were most popular among respondents.

“Since last year’s survey, average equity allocations have ticked down slightly, offset by a corresponding rise in allocations to alternative assets,” Mercer said. 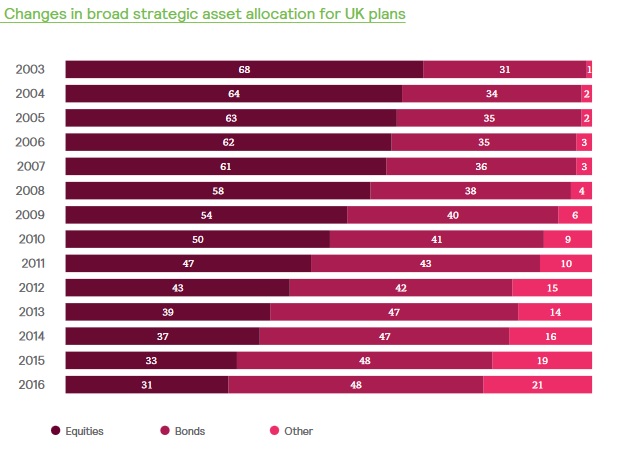