The funding ratios of German pension funds have declined sharply following falling market interest rates, in many cases wiping out portfolio gains for 2014.

Liabilities of pensions linked to DAX-listed companies hit €353 billion ($442 billion) this year, an all-time high, according to a survey by Mercer in Frankfurt. This figure is 86% higher than the €190 billion recorded in 2008.

German funds have had a strong 2014, with investment returns averaging roughly 6.7% between the start of the year and the end of October. Mercer estimated that returns could average 7.5% for the whole of 2014, putting overall assets at roughly €213 billion.

But the effect of these returns has been all but wiped out by the knock-on effects of the European Central Bank’s record low base interest rate. This has led to a downward trend in actuarial interest rates, which have declined from 3.7% at the start of 2014 to 2.3% at the end of October. 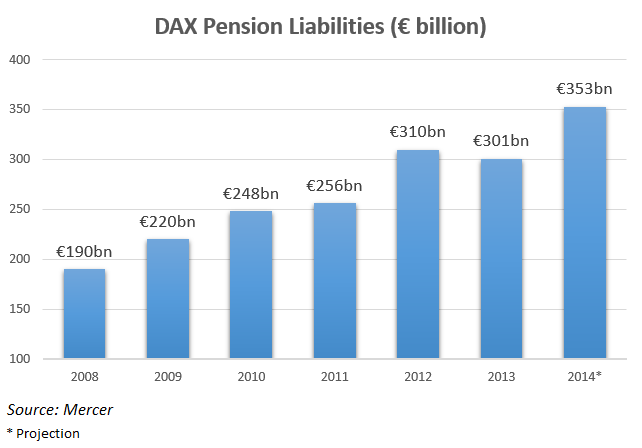 However, Thomas Hagemann, chief actuary at Mercer, said 60% was still “a good rate” for these pension funds. The majority of pension funds covered by the study are contractual trust arrangements, a non-regulated pension model that allows greater flexibility for investments. There is no requirement to keep these plans fully funded as pension payments are insured by the country’s Pensions-Sicherungs-Verein in case of company insolvency.

Pension funds in the Netherlands have suffered a similar fate this year. Bernard Walschots, CIO of the Rabobank Pension Fund, writes in next month’s issue of Chief Investment Officer Europe that the volume of Dutch pensions’ liabilities has “increased significantly, exerting strong downward pressure on coverage ratios, despite positive returns from most asset classes”.

Subscribe now to receive your copy of CIO Europe in print or as a digital magazine.