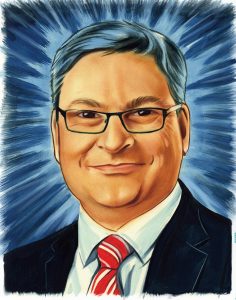 Working as an engineer at the beginning of his career, Arndt worked his way through different management firms before beginning his tenure at the Future Fund, where he has expressed his appreciation to be able to “benefit future generations of Australians.” He joined the fund in February 2008 to lead the infrastructure and timberland investment programs.

He was promoted to CIO in September 2014 and has since been responsible for leading the fund’s investment team and designing and implementing portfolio strategies across the six funds the Future Fund is responsible for.

Amid market volatility in the first quarter this year, the Future Fund lost just 3.4%, which far outstripped broader benchmarks like the S&P 500, which lost about 20% in the same period, according to its most recent financial report. Arndt said a number of defensive strategies, such as selling the fund’s illiquid assets, helped the fund prepare for the downturn. The Future Fund was worth about AUD$162 billion (US$116.5 billion) in March, the report said.

“Raphael is an effective leader who has proved his ability to build high-performing teams and organizations,” Chairman of the Future Fund Board of Guardians Peter Costello said. “He has been integral to developing the way the organization works as well as driving the development and implementation of its investment strategy.”

Arndt worked diligently in the fund’s reorganization efforts that were announced in March 2019, helping to design a framework that empowered the fund’s staff and encouraged greater levels of communication and the dissemination of intelligence among different teams.

“We did always have a view that we wanted to collaborate and be “joined up,” which means that the investors talk to each other, and the top down talk to the bottom up team, and vice versa,” Arndt told CIO. “They enforce each other, and we built a culture that supported that.”

There were a multitude of factors that played into the decisionmaking of Arndt and his colleagues when deciding how best to organize the Future Fund to position it for success. Among them were the changing investment landscape, as more niche investable opportunities presented themselves with sound expected risk-adjusted returns, and also the changing investment mandate of the Future Fund, as it became responsible for the management of more funds’ portfolios.

“We needed to address the cost of capital framework to make it more robust, but also the team had grown and become more complex, because as the markets got more expensive, we had to push into more esoteric and granular strategies,” Arndt said. “Instead of just doing broad credit, we decided to have a high yield credit strategy, and then we decided to have a private credit strategy, and so forth.”

More portfolios mandated to Arndt’s team from the government also meant “operational complexity of the business was increasing,” he said. “Assets under management today are over $200 billion Australian dollars. Running one large plan is an investment challenge, but running six funds with all different sizes, from AUD 2 billion up to over a AUD 100 billion, is much more operationally complex.”

“The first two principles the organization was founded upon were to make the employees empowered and informed,” Arndt told CIO. “What I’ve said under that is know your role, know your authority and when to escalate something, take risk confidently, and knowledge is collective. If we have knowledge anywhere in the organization, everyone should have it.”

“It’s not as simple as a delegation framework, because we don’t want [people working individually] we want people collaborating. It’s more of a network organization than a hierarchy.”

Additional investments into the organization would help the staff reach their desired goals with their team restructuring, Arndt added.

“We’re not where we want to be yet, but we’re headed towards it, and we’re investing in technologies to support that such as knowledge management and collaboration software.”

Another priority for the team was to emphasize the importance of positioning the team’s perspective as long-term investors, Arndt said. Avoiding macro level distractions and “noise” is paramount to the team focusing on its own individual return targets and characteristics its members look for in opportune investments.

“[Another point is] investing into the long-term,” he said. “Under that I would say avoid noise, especially in the macro where there can be lots of distractions and things that aren’t really important for long-term investors. Make long-term decisions and ignore peer risk, we’re here to maximize long-term returns for us that benefit the total portfolio.”

The fund has also been making progress on cognitive diversity within its teams. The fund’s strategic objectives encourage their staff to “harness diverse thinking. Be open to different ideas and be open to challenges, use resources flexibly, and embrace external views,” Arndt added.

“We’ve changed the function of our investment committees to be more open to debate, so that the culture of the committee isn’t one that shuts down one person’s view, but embraces them and asks them to explain why they have a different view, and let’s check if we all agree or if we want to change our own views.”

Arndt was previously an investment director with Hastings Fund Management and has been involved in infrastructure policy decisions from both the private sector and the public sector, with the Victorian Department of Treasury and Finance. He holds a Ph.D. in private infrastructure policy from the University of Melbourne.