The FCA said the increase from the previous year was significantly influenced by the changes the organization made regarding the reporting of complaints. Since June 2016, firms have been required to report data in a new way that has increased the number of complaints reported.

“We now require firms to report all complaints which gives us a fuller picture of where the industry might not be meeting customer needs,” said Christopher Woolard, the FCA’s executive director of strategy and competition, in a statement. “But even allowing for the change in reporting rules, and some progress made, the numbers are still significant.”

“Our analysis suggests this is a real increase since the first half of 2016, when 934,965 were received,” said the FCA in its report. “Because few PPI complaints are resolved by the end of the next business day, the volume of PPI complaints is unlikely to be impacted by the changes in the new return.” 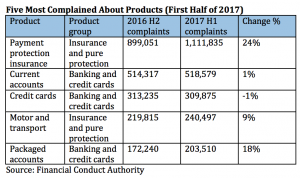 PPI is insurance that helps cover monthly repayments on mortgages, loans, credit cards, store cards, or catalogue payments if the holder of the insurance is unable to work due to illness, accident, death, or unemployment.

After PPIs, the next most-complained-about products were current accounts, with more than 518,000 complaints, and credit cards, with nearly 310,000 complaints. The FCA said although complaints about these products have increased since the first half of 2016, the change is not a meaningful comparison, as the new reporting changes are likely to have affected these products.