The change in funding during the month was a result of liabilities decreasing 2.2%, while asset values increased 2.0%.

“January’s month-end funded ratio is the highest in over four years since December 2013 when the funded ratio was 88.9%,” said Ned McGuire, managing director of Wilshire Associates. “January’s increase in funding was driven by a decline in liability values caused by the significant rise in Treasury yields, and an increase in asset values fueled by strong performance in global equities.”

Wilshire’s figures represent an estimate of the combined assets and liabilities of corporate pension plans sponsored by S&P 500 companies. The funded ratio is based on the CPLI – Intermediate liability, with service cost, benefit payments, and contributions in-line with Wilshire’s 2017 corporate funding study. Barclays Long Aa+ U.S. Corporate Index is used to estimate the most current month-end liability growth.

Wilshire also reported that assets tracked by its Wilshire Trust Universe Comparison Service had a median return of 3.59% for all plan types in the fourth quarter of 2017. The service also reported a median one-year gain of 14.72%, which is more than twice the 7.24% reported at the end of the previous year.

“This quarter marked the ninth consecutive positive quarter, the longest string of positive quarterly returns for all plan types since June 1998,” said Robert Waid, managing director, Wilshire Associates. “This was the best one-year return since the year ending June 30, 2014, ended with 15.51%, and fourth consecutive quarter to post an annual return above 10%.” 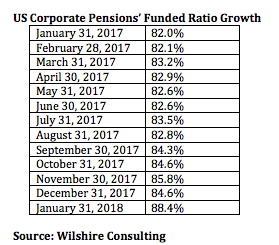