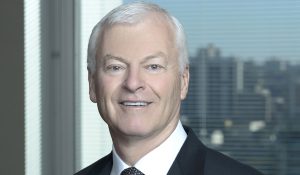 Unlike most lung cancer patients, Costello never smoked, which is the case for about 20% of the victims of the disease.

“Paul, in many ways, was the father of our successful culture at the Future Fund, and I’m sure his legacy will continue to live on strongly for many years to come,” CEO David Neal told CIO in an email.

Costello’s start in an investment career was by happenstance, as he initially worked as a teacher and South American travel guide.  The New Zealander moved to Australia in 1989 with his wife, Denise, and soon joined the National Australia Bank as a superannuation, or retirement saving, specialist. After working his way up to financial planner, he then took an executive assistant job at the Superannuation Trust of Australia in 1995, as he was becoming fascinated with the not-for-profit space.

“My hunch always was, with industry funds, that this would be their game,” he told IO&C.com in an August interview.

Costello replaced Ann Byrne as CEO when she left the fund to head UniSuper in 2000. She currently is a trustee of LUCRF Super and also sits on several international aid boards.

Shortly after his promotion, the Super Trust agreed to a merger with the Australian Retirement Fund. Costello accepted an offer to start the New Zealand Superannuation Fund in 2003, so he and Denise moved back home. Before leaving, he passed the torch to Mark Delaney, who helped grow the Retirement Fund to $140 billion.

At the New Zealand Super, Costello and his team built its reputation to be one of the best sovereign wealth funds in the world. It is best known as an early adopter of environmental, social, and governance (ESG) principles, and still keeps a strong focus on its governance, transparency, and investment performance. The fund initially started with NZ$2.4 billion, and is now valued at NZ$38.9 billion.

Costello’s work with the Future Fund began in late 2006, when he and Denise returned to Melbourne. As the fund’s first general manager, and essentially CEO in all but title, he began to put his stamp on the fund.

“To be in a position to start investing, I wanted find the best people I could,” he said in the IO&C.com interview. “So, the first ones I hired were the CFO, Paul Mann, a head of operations, Gordon McKellar, and so on, before I filled the crucial role of the CIO.”

Costello left the Future Fund at the end of 2011. He was succeeded by Mark Burguess, who departed two years later. In 2014, Neal, who joined in 2007, became the third and current CEO.

After Costello left the Future Fund, “he was worried about what might come next and whether he could be useful to anyone,” Neil said during Costello’s eulogy, reported by Investment Magazine. “But of course he needn’t have worried, because his experience and leadership strengths were in high demand.”

Lately, Costello enjoyed success in non-executive roles and chaired multiple boards such as Blackstone, the Payments System Board of the Reserve Bank of Australia, and the Board of AIA. He also served as an advisory committee member of China’s sovereign wealth fund, CIC.

Costello was first diagnosed with lung cancer in 2017. The condition spread to his liver, and eventually to his brain. Nevertheless, he remained focused on his responsibilities, attending board meetings until he could not physically partake.

Costello passed away on November 5. He is survived by Denise, and their children, Caitlin and Harry.

“As the inaugural leader of the Future Fund, Paul endowed it with his personal characteristics.  He imbued it with a very strong sense of humility, integrity, mutual respect, and professionalism,” said Neal.

“The Future Fund is the place it is today because of Paul’s vision and determination to establish an investment organisation which is the best place it can be. Above all this was by selecting great people and then backing them to succeed.  That legacy remains alive and strong today,” Raphael Arndt, the fund’s chief investment officer, told CIO in an email.

Donations for lung cancer research can be made to the Peter MacCallum Cancer Centre foundation here.