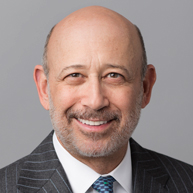 Lloyd Blankfein is retiring from Goldman Sachs after 36 years with the banking behemoth, 12 of them as chief executive officer.

In a memo to Goldman employees, the departing 63-year-old CEO and chairman announced David Solomon, company president and co-chief operating officer, as his replacement at the end of September. When he leaves, Blankfein will support the firm as a senior chair.

“I always knew this day would come. But, of course, the reality of it prompts many thoughts and emotions,” Blankfein wrote, admitting that he’s been grappling with the idea of retirement. “When times are tougher, you can’t leave. And, when times are better, you don’t want to leave.”

He expressed optimism for Goldman’s future, and reflected on his long career with the institution. He thanked his family and all the business’ staff. He called the firm’s employees its “most differentiating strength.”

“When we have had tough days (or a crisis or two), I could count on you to bear down, help clients and focus on solutions and getting better,” wrote Blankfein. “In better times, I have fed off your excitement, ideas, and passion. And, there were times when your support got me through my own challenges.”

The departing executive called his successor, Solomon, 56, “a terrific partner.” Blankfein touted Solomon’s success as COO and division head. Solomon’s promotion should trigger a series of management changes as he elects his lieutenants. In addition to inheriting a plan to grow the bank by $5 billion in three years, he is a big backer of the firm’s consumer finance initiative and improving gender equality within its ranks.

Blankfein started as a commodities trader, taking the executive reigns in 2006. Since he became CEO, Goldman’s total net profit has been $92 billion, Quartz at Work reports.

The announcement came as Goldman revealed its second-quarter results, where the banking titan reported $9.4 billion in net revenue and $2.57 billion in net earnings.

« Fed Chair Hints He May Ease Off on Rate Boosts