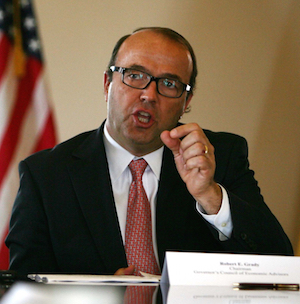 Bob Grady has stepped down as chairman of the New Jersey State Investment Council, CIO has learned, ending his nearly five-year tenure with the $80 billion pension fund.

He made the announcement today, at the closing of the council’s final meeting of 2014.

The board unanimously passed a resolution thanking Grady for his leadership as a volunteer, during which time the fund substantially outperformed its benchmarks and diversified its holdings. “The members of the council acknowledge and appreciate Chairman Grady’s unique blend of outstanding investment and communication skills, which will be deeply missed,” the resolution stated. “We are grateful for his leadership, will miss his warmth and wisdom and good humor, and thank him for his selfless and exemplary service.”

For the four years ending May 30, 2014, the fund has outperformed its policy benchmark by an annualized rate of 1%, generating an additional $3 billion in alpha. New Jersey’s pension returned 17% in the 2014 fiscal year—in line with the median large public plan, according to Wilshire Associates—while taking less risk than 85% of its peers.

In 2010, newly-elected New Jersey Governor Chris Christie—a friend of Grady’s since high school—asked the former Carlyle partner to take over the investment board for the duration of Christie’s first term.

“We are grateful for his leadership, will miss his warmth and wisdom and good humor, and thank him for his selfless and exemplary service.”

The council elected Grady volunteer chairman of the pension in September 2010, and he stayed on past the agreed-on four years to ensure a smooth transition between CIOs. He had recruited former CIO Tim Walsh away from the Indiana State Teachers’ Retirement Fund in 2010, and Walsh resigned for a private sector role three years later.

Walsh’s interim replacement Chris McDonough was named permanent director in March 2014. Grady said he was committed to remaining onboard until McDonough had settled into the top job, which he says the Power 100 member and Innovation Awards finalist has done “very well.”

Earlier this year, Grady was the target of criticism from a major New Jersey union, which accused the fund of pay-to-play violations during his and a prior chairman’s tenures. The state ethics commission has taken no action on the union’s allegations, which it addressed to the department.

Several sources say Grady’s young son has been critically ill over the past several months, and reducing his travel schedule has become a priority for the Jackson, Wyoming-based investor.

He also remains a policy adviser and speechwriter for Christie, and departing the fund would allow him greater involvement in a national campaign, should the New Jersey governor choose to run for president.

His resignation takes effect immediately, and an election for a new chairman is expected to occur early next year.