(February 4, 2013) -- If hedge fund strategies were chemical elements, most would have more in common with radioactive francium than ultra stable noble gases.

That is one takeaway from the latest “Periodic Table of Hedge Fund Returns” produced by Boomerang Capital, a Connecticut-based hedge fund advisory. Boomerang has been rendering the success of hedge fund strategies visually since the pre-crash era, when short bias funds struggled and nearly every other approach won big.

The winning strategy of 2012, distressed securities, has been a safe bet three out of the four years since 2008. Unsurprisingly perhaps, the single year in that stretch that distressed debt posted negative returns (2011), short bias made its only appearance above the break-even line. Hedge fund darling Daniel Loeb has been winning big on distressed debt for a number of institutions invested in his value-oriented fund, Third Point LLC. New Jersey’s public pension fund made a $100 million allocation to the fund in 2011—one of the few hedge fund investments it agreed to pay a 2-and-20 management/performance fee structure for. 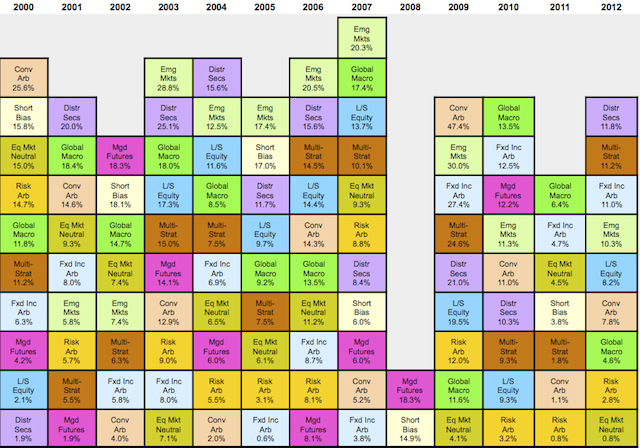 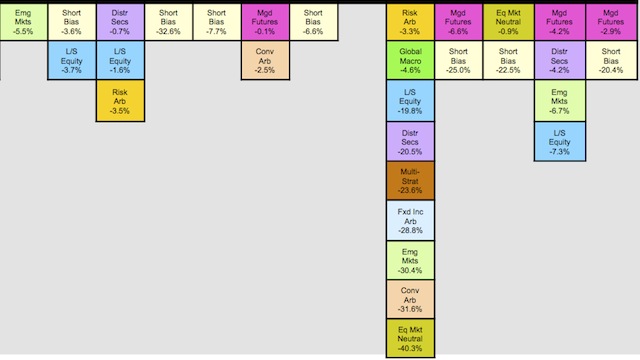 « 2012: A Good Vintage for Large US Public Pension Funds