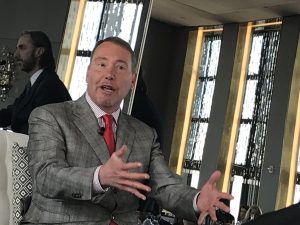 Bond guru Jeffrey Gundlach, wary of burgeoning government debt, criticized the Federal Reserve for backing off on its rate-raising regimen.

Federal Reserve Chairman Jerome “Powell used to be disciplined and pragmatic,” DoubleLine Capital Chief Executive Officer  Gundlach told a group of investors in New York Tuesday. But now Powell is a creature of “fluidity,” he added. “So we can go on borrowing to infinity.”

Certainly, the current low-rate environment is an inducement to add more debt to the balance sheet, for both Washington and other borrowers, notably corporations.

Powell had been embarking on a campaign to hike rates, with four increases last year. But in January, amid concerns about a slowing domestic economy and sliding stock market, he relented and indicated that the tightening would be halted for now.

“He’s not going to raise rates for five years,” Gundlach speculated. And he observed that President Donald Trump’s business career was marked by large leverage and bankruptcies of his casino companies. Trump, up for reelection next year, has been calling on Powell and the Fed to lower rates.

“Donald Trump loves debt,” Gundlach said. “So I knew we’d see expansion of the deficit” when Trump took over.

Pointing to the $1.2 trillion increase in the national debt in fiscal 2018, Gundlach noted that the US government’s borrowing amounted to 6% of the country’s gross domestic product (GDP), which last year increased by 2.9%. In other words, he said, “the debt grew more than GDP did.”

Amid the steady expansion of Treasury bonds needed to fund the government, he said that now-quiescent interest rates were sure to grow more turbulent. He suggested that investors take advantage of this higher volatility by an investment maneuver called a put-call straddle, using the iShares 20+year Treasury Bond exchanged-traded fund (ETF).

With such an option, an investor in effect is positioned on either side of the ETF’s price. The hope is that the ETF’s price rises or falls from the option’s strike price by a sum that exceeds the premium paid to buy the option. Should long-dated Treasury bonds, which underlie the ETF, move more than half a percentage point, the trade will be profitable, he said.

Gundlach takes a pessimistic view on US economic growth prospects this year. He termed the recent first-quarter GDP increase of 3.2% “fishy.”

If the economy slides in 2020, Gundlach said, “Trump will blame Powell.” The problem with that election stratagem, he said, is: “How many people even know that the Fed exists?”