Hong Kong MPF Plans more than Double in a Decade

The MPF reported that at the end of 2016, the total asset value of the fund was HK$6.46 billion from the 4.19 million members, and that approximately 30,000 accounts had accumulated more than HK$1 million

“We are pleased to see the steady growth in the amount of MPF held by scheme members,” said an MPF spokesperson in a statement. “The report shows that the amount of voluntary contributions has increased significantly over the past decade.”

The MPF system is an individual savings account arrangement, under which contributions paid by or on behalf of members are used to purchase units of MPF funds, which are accumulated in the member’s account, as are any returns generated by the MPF funds. 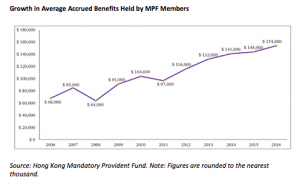 « Report: US Commercial RE Investments Down 12% Despite Market Being ‘Awash in Capital’