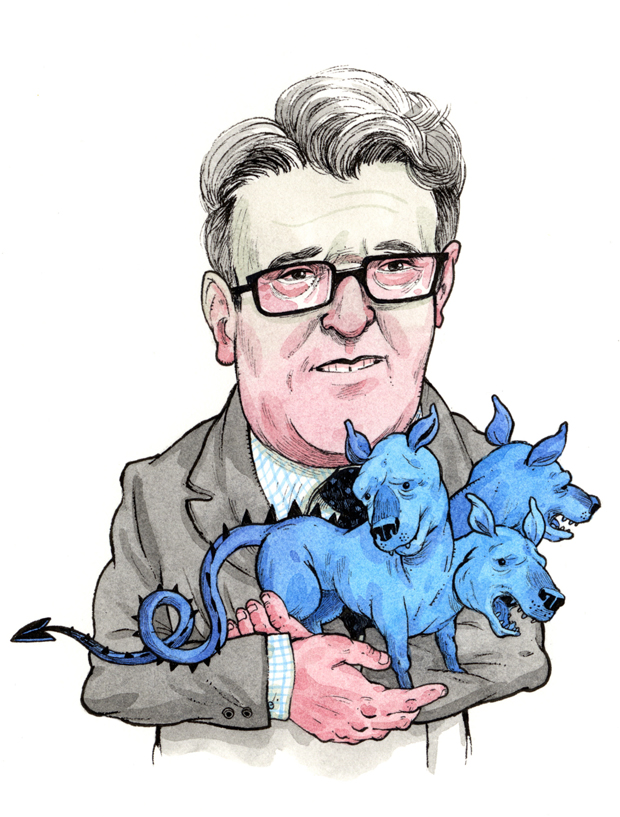 Art by John HendrixCIO: HSBC’s DB pension is now in what one consultant recently described as “the decommissioning phase”. How are you approaching this?

Mark Thompson: At the end of the 2011 valuation process we agreed to a ‘general framework’ with the sponsor and said we wanted to get to self-sufficiency. We call this the target-matching portfolio—or TMP—and we want to get there by 2025.

There are two ways to get from A to B: We could have investment performance that is better than expected—a little bit of that should come through. The other way is through the sponsor giving us more cash or assets. You might think that, given we’re fully funded, the sponsor would have little appetite to give us more. But they agreed to give us three contributions of £64 million a year in 2013, 2014, and 2015 to put us on a trajectory to get to the target-matching portfolio by 2025.

They were happy to do this because we said we would be a lot more mindful of the effect of the pension scheme on the bank’s capital position. By working closely together, it meant they would get fewer surprises and we would get help on our journey to a more de-risked position.

Why would we want to pay up when we’re big enough to do it all in-house?CIO: Would it not be easier to go for buyout? Was that discussed?

Thompson: Oh, of course. But you have to pay a life company or insurer to take the liabilities from you—and then it would hold the same assets that I’m holding, pretty much. The insurer also needs to hold capital against what it’s doing, and it has to create a profit margin. Why would we want to pay up when we’re big enough to do it all in-house?

We’ve created the same thing as annuity providers, without some of the constraints the regulator puts on them, the need for the capital they would have to hold, and the need for their profit margin.

If it comes to, let’s say, 2080 and the fund is just a few hundred million pounds, then we might be better off with a buyout because it’s not big enough to run in-house. When you’ve got £23 billion of assets, you can do it internally more economically.

CIO: As well as the cash injections you mentioned, there was an asset injection into the DB fund in 2010.

Thompson: In 2010, in lieu of contributions further out, we agreed to a contribution of £1.76 billion of debt from the bank’s balance sheet. It was capital efficient for the bank to pay us using this debt, and it was advantageous to us because we were getting contributions early and the assets at a rather good price. We did very well out of that, and both sides were happy.

CIO: Let’s talk DC. You spoke about the need for innovation when communicating to DC members in October, at a packed session of the Pensions and Lifetime Savings Association’s conference. What about innovation on the investment side?

Thompson: Along with the bulk of UK DC pensions, most of our members choose the default option, so getting that right is very important. Because of the UK’s ‘freedom and choice’ legislation, there are now essentially three things you can do with your pot: annuitize, take cash, or draw down income.

When we decided to shut the DB fund to future accruals and because of the ‘freedom and choice’ regulatory changes, we introduced two additional lifecycle funds. The ‘cash lifecycle’ starts in global equities and goes into a DGF, but three years before retirement it starts going into cash. At retirement it’s 100% in cash.

The ‘capital lifecycle’, for drawdown, is the same to start: global equities, then into a DGF. It stays in the DGF so the member is ‘on-risk’, ready to leave the scheme and do drawdown somewhere else.

When presenting to trustees, it’s always good to have a strategy that sounds clever, so I called it the Cerberus strategy. Do you know who Cerberus is?

There is no point telling a 25-year-old about drawdown. It’s only when you get to about 50 that there’s a difference.CIO: That’s the three-headed dog?

CIO: My knowledge of mythology hasn’t let me down.

Thompson: My point was that the body of these three lifecycle strategies is the same: global equities moving into a DGF. It’s only when you get near the end—or the front, depending on how you look at it—that you go to the annuity head, cash head, or drawdown head. I was going to call it after the three-headed dog from the Harry Potter books, but that’s called Fluffy, and it’s no good going to the trustees with a ‘Fluffy’ strategy.

This is where it’s important that it ties up with your communications and engagement strategy. There is no point telling a 25-year-old about drawdown. But in the early years it doesn’t matter what strategy they’re in: they’re all the same. It’s only when you get to about 50 that there’s a difference—it’s at that point you need to educate people so they can make informed decisions.

Also worth mentioning is the annual management charge for the funds. It’s zero. HSBC as the sponsor pays all the fees. The contribution rates are pretty good too: it’s 10% for the first £20,000 of salary and 9% thereafter if you don’t put anything in, and then matched to another 7%. If you put 7% in you get something like 23% to 24% of your salary going into the pension.

CIO: I’m going to see if there are any jobs going at HSBC. Has that come from a close relationship with the sponsor?

Thompson: It was the sponsor that set the contribution rate and agreed to pay the charges—it is what HSBC wanted to do. But I think it does show the employer takes the pension arrangements very seriously.

On a monthly basis I chair the investment, funding, and strategy group, which consists of people from my team and people from the sponsor. We discuss all the aspects you’d think such a group would discuss. It means there is very open and frequent communication between the sponsor and the trustees, to the extent I probably talk to the sponsor every day about something.

We have a common aim: Making sure that the pensions get paid. We look at how we can work collaboratively to make that happen.