For Ivy League endowments, fiscal 2017 was an atypical year, as underperformers outperformed, and the outperformers disappointed, according to investment research firm Markov Processes International (MPI).

“It was definitely an interesting year as far as asset allocation and the returns that the endowments got from asset classes,” said Sean Ryan, senior research analyst at MPI, in an interview with CIO. Ryan said the most surprising thing about 2017 was that a lot of the public markets heavily defeated the private investments.

“You see endowments like Cornell or University of Pennsylvania that are more geared toward public markets versus private investment as compared to Yale or Harvard,” said Ryan, “and they actually performed quite well.”

Despite the underperformance of private equity, Ryan said MPI data shows that Ivy League endowments are increasingly moving toward a higher risk/reward portfolio.

“We looked at data from 2005 to 2017, and based off of our exposures, we‘ve seen increased movement toward private investment,” he said.

Brown and Cornell bucked their historical trends by outperforming Yale, Princeton, and Harvard. Over the past 11 fiscal years, either Brown, Cornell, or both were among the bottom two performers among Ivy League endowments.

Unlike fiscal year 2016, 2017 was a strong one for most endowments, according to the report, which said every Ivy League endowment, except Harvard, beat the 60% equities, 40% fixed-income portfolio. Only Columbia and Princeton have beaten the 60-40 portfolio on average over the past 10 years.

For 2017, all endowments reported returns that were well above their historical payouts of 5%, even when including 1.65% for inflation. Dartmouth was tops among its Ivy peers with a return of 14.60%, while University of Pennsylvania was a close second with 14.30%. The report said Harvard continued its six-year trend of performing at or near the bottom of the class with 8.10% returns in fiscal year 2017.  Yale, which has been among the top three every year since 2011, delivered relatively mediocre returns of 11.30%. 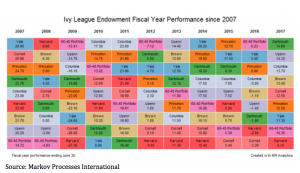 The report said that rallying public equity markets boosted Ivy endowment returns during the year. It also said longer-term trends show that the Ivy endowments continue to increase exposures to illiquid investments, which is more like the Yale model of a high-risk, high-return portfolio.

All asset classes, except for bonds and cash, performed significantly better during 2017 than they did in 2016, according to MPI. The largest magnitude of difference was in foreign equities. Developed foreign equities returned 30.42% more in fiscal year 2017 than in fiscal year 2016, and emerging markets returned 35.81% more. Yale has the lowest exposure to these asset classes, and the three highest-performing endowments—Dartmouth, Pennsylvania, and Columbia—had the highest exposure.