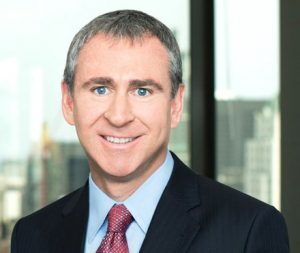 Count Ken Griffin as one of the success stories of turbulent 2020. His hedge fund empire was down, as were most other investors, in the February–March market debacle. But his firm Citadel’s rebound has been spectacular.

His flagship Wellington fund gained just over 20% through October, more than double the S&P 500’s showing. Overall assets for the hedge funds expanded to $35 billion. About a fifth of that, some $6 billion, is Griffin’s, Bloomberg calculates. His estimated net worth is $15 billion, Forbes says, which makes him the 34th richest person in the United States. His firm actually ended up ahead 1.2% for March (the market bottomed on March 23) and more than 5% for the first quarter.

The basis for the good showing was picking up good bargains in the late winter wreckage this year. Example: T-Mobile, which got slammed back then, and since has advanced 60% on account of its merger with Sprint. His hedge fund Citadel’s most recent position in the wireless carrier is $692 million, regulatory filings show. Griffin also has built strong positions in the top tech firms, whose prices have soared, such as Apple, which tanked too, eight months ago.

“It was a macro trader’s dream,” Griffin remarked at a recent event for the Robin Hood Foundation, the nonprofit anti-poverty charity he donates to. Citadel bought “when people are panicking,” he said. A Citadel spokeswoman said they can’t comment on performance.

Throughout, Griffin balanced his forays with some sensible safeguards. For instance, at mid-year, he had put “collars” around two high-flying holding, in case of volatility, which has been abundant this year—for Tesla and Amazon. Consisting of a put and a call with close to equal amounts, this options maneuver protects on the downside if a stock plummets, although it does limit the upside.

Also helping his bottom line this year is his ownership of Citadel Securities, one of the biggest market-making firms, which handles 20% of US stock trades. This year’s prodigious trading has been a boon to this unit.

Citadel now has large gold holdings, a change for him, he said at the Robin Hood event. This in part is a buffer against inflation, which Griffin has long been expecting to resurge. He pointed to other inflation hedges to own, such as energy and real estate.

No doubt, Griffin is one colorful guy. He famously started out in finance by trading corporate bonds from his Harvard dorm room, contending they were mispriced.

And he has a thing for trophy real estate. He has plugged $600 million since 2019, per Bloomberg, buying properties in Manhattan; Palm Beach, Florida; and London. Earlier this year, he scored Calvin Klein’s seven-acre seaside compound in Southampton, New York.

Ken Griffin: Nobody Cares About Inflation, but They Should

Ken Griffin: To the Mightiest Companies Will Go the Spoils