Borrowing to fund plans is trending with liability driven investing.

With the Pension Benefit Guaranty Corporation’s (PBGC) premium rates about to increase again, a confluence of factors is creating a positive climate for pension funds to borrow cash to boost funding levels and head toward liability-driven investing (LDI).

Other influences are the decreased cost of issuing debt in the market, which has fallen to about 1% in spread space, and the fear that future tax reform could erode tax deductions. “If taxes decrease in the future, you’ve managed to contribute today at a higher tax rate and get the big tax deduction,” said David Eichhorn of investment advisory firm NISA in October. Finally, there’s the uncertainty of whether markets can be the main driver of bailing a plan out of a deficit, and the relative ease of accessing the capital markets—something which may change.

Take, for example, Delta Airlines. At first, the post 9/11 climate was forgiving. The Pension Protection Act of 2006 (PPA) provided significant funding relief to airlines that had frozen pension plans, with Delta receiving the most favorable relief.

At first, PPA made two significant changes in the way minimum contributions were determined for corporate pension plans. It required:

• Plans to use interest rates based on current bond yields when calculating funded status. Rates had been falling and have since continued to fall. Lower rates result in a lower plan funded status and higher required contributions.

• Any underfunding to be paid in seven years; shorter than previously required.

However, under relaxed guidelines, Delta used an interest rate of 8.85% and was given 17 years to pay down any (pension) underfunding.

Eleven years later, Delta is below the 80% funded goals of most plans. In December 2016, the 10-K filing for Delta’s plan was 49% funded. Delta held tight in the first quarter, and, like most plan sponsors, enjoyed a bump from favorable equity and bond markets. In March, it joined into what has become an ongoing trend, announcing a debt issuance of $2 billion (net proceeds of $1.98 billion) to fund its pension plan, prefunding a portion of its already-committed 2018-2020 contributions, according to the SEC Form 8-K it filed with the debt issuance. “Our goal remains to achieve at least an 80% funded status for the pension plan by 2020,” its 10-K noted.

Delta was gaining an advantage. Since it began its balance sheet improvement strategy in 2009, which reduced the airline’s adjusted net debt by nearly $11 billion, annual interest expenses were reduced, according to its 10-K. Recently, Delta has made pension contributions above the minimum amount required. For instance, it contributed $1.3 billion, including $950 million in cash and shares of its common stock worth $350 million in 2016. This represented $750 million above the minimum funding requirements. In 2014 and 2015, it contributed $917 million and $1.2 billion, respectively. In March and April of 2017, it contributed $3.2 billion. Subsequently, its credit rating was upgraded by all three major ratings agencies.

To outsiders, borrowing $2 billion might have seemed bold for an airline. To insiders, the stars were aligned. Borrowing to fund the plan would bring it, by some estimates, up to a 62.7% funded ratio.

“With the sun setting on airline funding relief, I would want to have a strategic plan to get out of that pension risk business,” said Jeff Passmore, LDI strategist at Borrow Hanley.

Airline pension plans are typically less funded than the pension plans of other industries. Borrow Hanley released a pension plan funded status analysis by industry that estimated airlines were, on average, 69% funded versus the 85% overall funding average. “To become fully funded, I would plan on doing a significant part of it through contributions over time, because the market movements alone are not enough to close the gap,” said Passmore, advising, “While I would still keep some amount of my pension assets in return-seeking assets, I would decrease that percentage as I got closer to being fully funded. At that point, I’d leverage a lot of the work that’s already been done in the LDI space by other corporate plans sponsors who hadn’t had this special relief.” He added, “There’s no need to do anything custom right away. I would begin by moving my fixed-income allocation into one of the long-duration market-based indexes.”

“The new trend has been to sponsor voluntary contributions to fund-up—many of which come on the backside of debt issuance—to increase funded status and generally further de-risk the plan,” said Eichhorn.

“Corporations can borrow capital and use this to de-risk their pension plan with a thoughtfully managed LDI program given where we are in the interest rate cycle,” said Kam Chang, head of client advisor of SECOR Asset Management. “Borrowing to fund the pension plan now, when interest rates are still low, may be more advantageous even than buying back shares.”

Driving the trend is the rising cost of PBGC premiums. The quasi-government entity is supposed to take on pension obligations if a plan bankrupts, but its rising premiums make it more expensive to have an underfunded plan.

“The more underfunded a plan is, the higher the premium it will have to pay,” said Owais Rana head of Pension & LDI Solutions at Conning. “Plans are aiming to remain at or above the 80% funding level, below which the PBGC premiums may get really painful.”

Variable-rate premiums, charged by the PBGC according to a sponsor’s deficit, tripled between 2011 and 2016—and are expected to quadruple by 2019. According to Mercer’s recent CFO survey, 40% of respondents chose to raise funding to reduce the cost of future PBGC premiums, and 33% are considering it.

“Start by running the cost of issuing a bond and putting money in the plan, and de-risking the plan, versus paying the PBGC premium,” advised Greg Calnon from Goldman Sachs Asset Management (GSAM) Global Portfolio Solutions team. And be sure to consider the tax deduction. “Where the math simply works out, such that you borrow money, put it in the pension plan, get an interest expense tax deduction associated with that, and, get a lower PBGC premium, it can all work in the interest of the pension plan and the company.”

Since the PBGC also charges a fixed cost for the number of people in the plan, ($80 per person in 2019, up from $35 in 2010–2012), after funding the plan, a steady number of plans are choosing annuitizations, which shrink the number of participants by shifting a portion of liabilities.

This year, upon issuing a debt offering of $1 billion and funding its pension plan by $1.25 billion, International Paper transferred $1.3 billion in pension liabilities to Prudential. The deal encompassed 45,000 former employees and beneficiaries who were receiving less than $450 per month.

“The annuity buyout program we did with Prudential was part of our overall plan to ‘right-size’ our pension liability,” said International Paper CIO Bob Hunkeler. “In addition, given the high cost of PBGC premiums and administrative expenses in relation to the relatively low-benefit amounts of the retiree accounts we transferred, it made a lot of sense to transfer the liability to Prudential.” 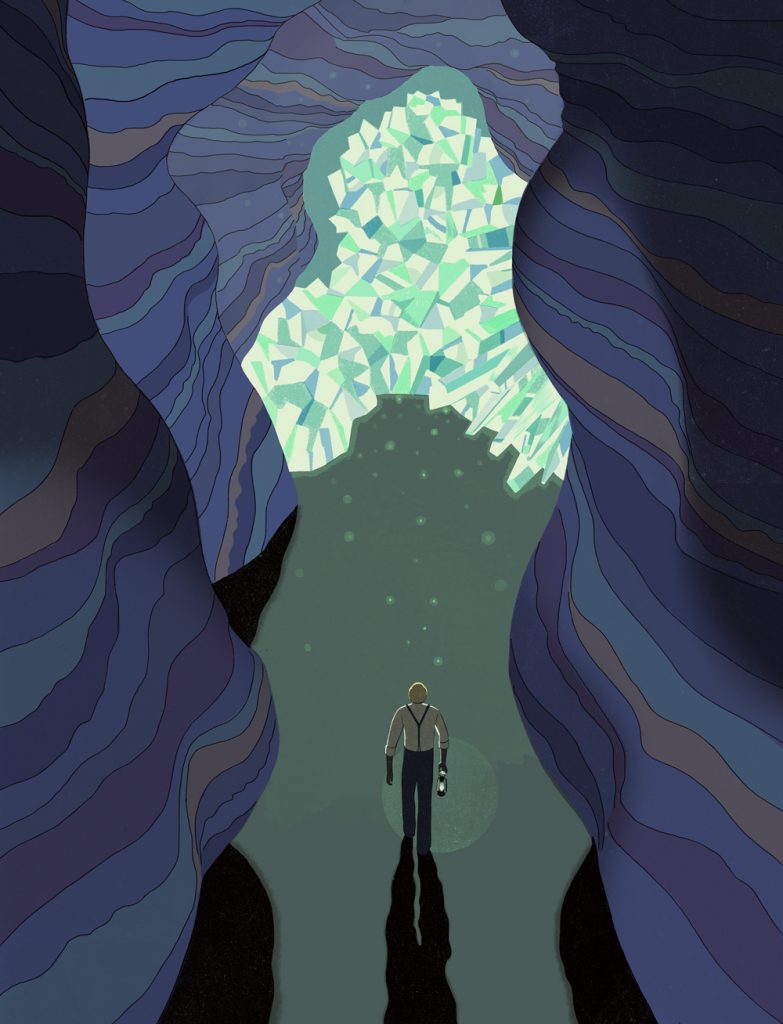 The project took nine months and involved the company’s finance, HR, and legal departments, consultant Willis Towers Watson and custodian State Street Bank. “For those of us in the Trust Investments Department, the biggest challenge was managing an asset-in-kind transfer that was part of the deal. It required us to maintain market exposure throughout the transfer process, which we did in part via derivatives,” Hunkeler told CIO (see interview on page 34).

Before making LDI decisions, Hunkeler advises other CIOs to get concensus from senior management.

“Don’t own this decision by yourself. This is a corporate-level decision that needs to be made with, if not explicitly by, senior management, and certainly, with their direct input,” he said.

Yet there is always worry that interest rates will rise, and, like the tide, lift all funded statuses. It causes many CIOs to wait and see. But the gamble could jeopardize funded statuses in the future.

“You’re always going to be worried that you’re at some sort of bottom where rates are just about ready to go up,” said Hunkeler. 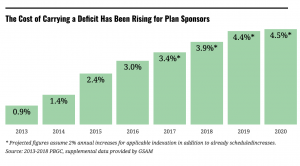 “It’s an interesting time to be considering moving toward LDI, when everybody expects interest rates to rise, right? And it’s been the case for the last six years, frankly,” Jay Kloepfer, director of capital markets research at Callan told CIO in October.

“I think clients are going to see funded status deteriorate again at year-end, when we come to do year-end accounts,” Gordon Fletcher, partner at Mercer, told CIO in October. “They’re going to be scratching their heads again, saying, ‘Assets are up, what’s going on?’ And of course, discount rates have come down, and that’s driven up liabilities. In these scenarios, early adopters of LDI strategies have done really well. Later adopters have still done well. And those who have yet to adopt, you know, really need to get on with it, and get a plan in place.”