The estimated aggregate funding level of pensions sponsored by S&P 1500 companies saw a 1% increase in July to 83%, according to a report by Mercer.

Gains in equity markets were offset by a decrease in discount rates, the report said. The estimated aggregate deficit stood at $404 billion—a $12 billion decrease compared to the previous month. It’s also down $4 billion from the end of 2016.

“Interest rates finally stopped their fall, allowing equity gains to drive a modest improvement in funded status,” Matt McDaniel, a partner in Mercer’s wealth business, said in a statement. “But rates remain depressed, and are still only 40 basis points above their 2016 lows. Rising rates would help funded status, plan sponsors will need a plan to capture these gains, or else they will continue to face significant risk.”

Estimates are based on each company’s latest available year-end statement as well as projections to July 31, 2017, in line with financial indices. Estimates include both qualified and non-qualified US domestic plans, as well as all non-domestic plans.

The figures for estimated aggregate surplus/(deficit) position and the funded status of all S&P 1500-sponsored company plans as well as high-quality corporate bond yield and S&P 500 data points can be viewed below. 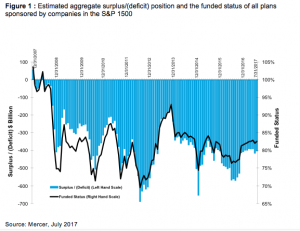 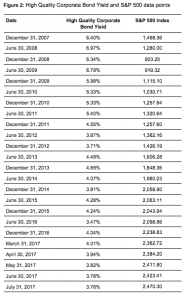