A report from Mercer finds the estimated aggregate funding level of pension plans for S&P 1500-sponsored companies decreased by 1% to 82% funded status for August.

“With rates down another 10 bps in August and about 40 bps over the year, growth asset performance has not been able to drive improvement in funded status.” said Scott Jarboe, a Partner in Mercer’s Wealth business. “We expect plan sponsors may be pondering contributions in September, which is the plan year close for calendar year plans, to improve funding levels and advance their destination while also defraying future PBGC costs.”

The estimated aggregate surplus/ (deficit) position and the funded status of all plans sponsored by companies in the S&P 1500 chart can be viewed below. 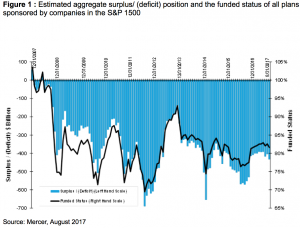