According to research from Mercer, positive equity markets and an increase in discount rates drove the $291 billion estimated aggregate deficit to shrink $84 billion from its $375 billion debt from December 2017. January equities received gains of 5.6% from the S&P 500 and 5% from the MSCI EAFE index. The discount rates measured by the Mercer Yield Curve increased to 3.74%, up 18 basis points from the end of 2017.

According to Mercer, the estimated aggregate assets to liabilities for the end of January were $1.99 trillion to $2.28 trillion, slightly more positive than the end of December, which saw $1.95 trillion in assets and liabilities of $2.33 trillion.

“The volatile markets of early 2018 underscore just how important risk management is for pension plans,” Matt McDaniel, a partner of Mercer’s US Wealth business, said in a statement. “January was a great month, driving funded status to a four-year high, and plan sponsors with timely execution on dynamic de-risking strategies were able to lock these gains in before the market decline in early February. Sponsors whose governance model doesn’t support systematic de-risking in real time saw these gains evaporate in days, and may continue to realize funded status volatility.” 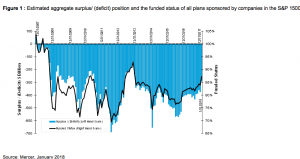