However, the Milliman 100 PPFI’s total pension liability (TPL) also increased, growing from $4.871 trillion at the end of Q2 to an estimated $4.98 trillion at the end of Q3. According to Milliman, the TPL will “grow modestly over time” as interest on the TPL and the accrual of new benefits exceeds the benefits paid to retirees.In addition, asset values for the top 100 plans have also increased in the same timeframe from $3.443 trillion to $3.517 trillion.

Although investments raked in roughly $102 billion, $28 billion more in benefits were collectively paid out by the plans than acquired from contributions.

“These plans are moving in the right direction, with two more crossing the 90% funded mark in Q3, bringing the total to 16 plans with 90% funding or above,” Becky Sielman, author of the Milliman 100 Public Pension Funding Index, said in a statement. “But that progress is hampered as plan sponsors reduce their interest rate assumptions to reflect current market expectations—something one-third of the plans in this study have done in their latest reported fiscal year.” 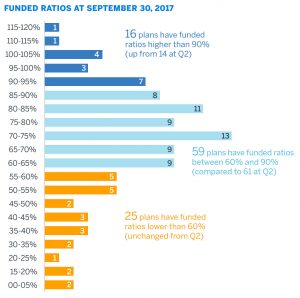