The note also revealed that although more than 100 crypto-hedge funds have popped up since 2011, 84 launched in 2017. This year’s uptick is undoubtedly reflective of Bitcoin’s incredible price growth, from January’s $800 to nearly $20,000 over the past weekend.

The note, which contains data from both Autonomous NEXT and the bank’s own research, aims to help the interest of institutional investors at a time where CME Group and CBOE, two of the largest US-based commodity trading platforms, have launched Bitcoin futures products. So far, both exchanges have experienced relatively thin trading. 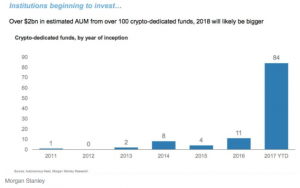