The New York State Common Retirement Fund (CRF) executed approximately $15.8 billion in transaction value throughout the 2018 calendar year, wrapping up the year with more than $1.8 billion in December activity, according to a recently issued report from the $207 billion pension system.

A summary of its transaction activity throughout the year is below: 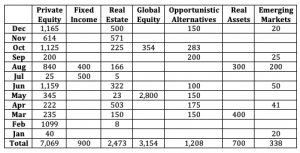 In December, the institutional investor handed out three large commitments to funds managed by Brookfield, KKR, and Thoma Bravo. Brookfield Capital V received a $400 million commitment, taking an opportunistic approach towards asset-heavy businesses, while $300 million was committed to the KKR Global Impact Fund, investing across five impact verticals aligned with the UN Sustainable Development Goals. A commitment of $400 million was given to Thoma Bravo Fund XIII, which invests exclusively in software.

The fund also made a large contribution to Blackstone Real Estate Partners IX, giving the manager $500 million as part of an existing relationship across several past funds.

Representatives of the pension did not respond to questions by press time.

Negative Q3 Performance
The CRF’s estimated return for the three-month period was -7.17%, New York State Comptroller Thomas P. DiNapoli said in a recent statement. The underperformance was mainly a result the ubiquitous global equity market downturn during the period.

The CRF has a significant exposure to public markets, with 36.4% allocated to domestic and 14.9% to international equities, as of December 31,, 2018.

“Like other investors, the fund saw strong half gains erased during the market’s steep drop at the tail end of 2018,” DiNapoli said in a statement.Other large pension plans, such as the California Public Employees’ Retirement System (CalPERS) and the California State Teachers’ Retirement System (CalSTRS) also reported negative returns as an influence of the market’s dismal performance.

By Elijah Owens
LOG IN TO JOIN THE CONVERSATION