“The environment-related mandates have had a return that over time has been somewhat weaker than the broad markets and our general equity investments,” said Yngve Slyngstad, CEO of Norges Bank Investment Management, at a recent hearing. He runs the money for the Government Pension Fund Global, which is the world’s biggest sovereign wealth fund.

He delivered his warning to members of the legislative body, called Storting, as he explained the fund’s management directions.

The fund is a mover and shaker in the oil world, and the finance panel aims to push its equity-heavy investments in a greener direction, something Slyngstad said is already reducing returns. He acknowledged that some environmentally friendly investments, such as “so-called green bonds,” might one day play a larger role in the fund’s portfolio, as they tend to be cheap. But he prefers stocks at the moment, and it makes up 70% of holdings.

To back his equity-oriented preference, he pointed out that, despite the stock portfolio losing billions toward the end of 2018, a subsequent equity rally in the first quarter helped the fund generate a %9.1 return, erasing those losses. Stocks in general returned 12.2% in the quarter Slyngstad called“the fund’s best quarterly return measured in kroner ever.” 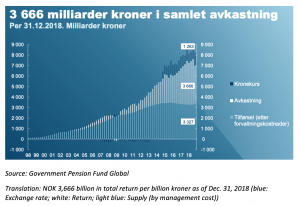 At the end of 2018, the fund had roughly $5 billion invested in environmentally mandated equities.

Norway’s Parliament has required that the fund exclude fossil fuel businesses labeled as “upstream companies” by FTSE Russell, which Slyngstad argued have not been properly defined. “We do not know exactly what companies this applies today, as the index provider plans changes in the sectoral classification,” he said. 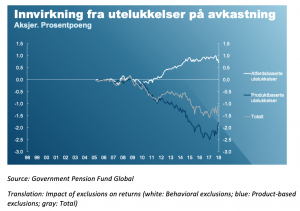 He explained that if the fund is going to exclude these sorts of assets, there needs to be a “high threshold” as to why. “Historically, product-based exclusions have inflicted costs on the fund, in the form of weaker returns,” he said, and hurts the portfolio’s risk diversification.