The New York State Common Retirement Fund earned an estimated 5.23% return on investments for the fiscal year that ended March 31 to reach an estimated value of $210.2 billion, up from $207.4 billion at the end of fiscal year 2018. This was below the fund’s long-term expected rate of return of 7%, and well behind the 11.35% the portfolio returned last year.

Despite the underperforming return for 2019, the fund’s asset value has risen 93% in the past 10 years, and has more than tripled since 1995.

“The Fund’s value continued to grow during its 2019 fiscal year and remains well positioned to meet its long-term return expectations and provide retirement security for our members, retirees and their beneficiaries,” New York State Comptroller Thomas DiNapoli said in a release. “It was a tumultuous year in the markets that fortunately came with more ups than downs, including a swift recovery from December’s significant correction.”

Private equity was the fund’s top-performing asset class, returning 9.90% for the year, followed by domestic equities, real assets, and real estate, which rose 8.84%, 8.15%, and 7.09%, respectively. The worst-performing asset class was non-US equities, which lost 4.46% for the year, after returning 17.02% in 2018, followed by absolute return strategies, cash, and Treasury Inflation-Protected Securities, which returned 2.07%, 2.59%, and 2.76%, respectively. 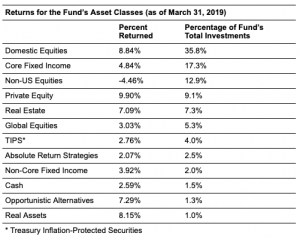 New York Common Must Have 100% Sustainable Investments by 2030, Study Urges

« Diversity Not a Priority for Asset Managers