The Ohio Public Employees’ Retirement System (OPERS) is in the early stages of adopting a new asset allocation policy after reducing the $100 billion portfolio’s assumed rate of return twice in recent periods.

During its January board meeting, pension staff were presented with two hypothetical target allocations “designed to stimulate debate,” a spokesperson told CIO. The retirement system’s investment counsel, NEPC, is expected to formally present an asset allocation policy to be considered by the board in March, which “could be very different” than the presented allocations.

“The more important debates will be in March and beyond, when the proposed allocations are discussed,” the spokesperson added.

The pension recently reduced its assumed actuarial rate of return for its defined benefit fund to 7.2% from 7.5%, beginning at the start of the 2019 calendar year. “This action reflects worsening expectations in the capital markets since OPERS’ last five-year experience in 2016, which prompted the board to reduce the assumed rate of return for the defined benefit fund from 8.0% to 7.5%,” a statement from the pension read.

A summary of the two theoretical allocations compared to the current policy is below: 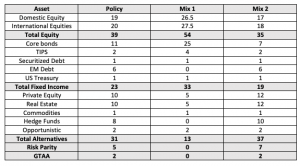 Asset allocation changes are “something [OPERS does] periodically to determine the optimal asset mix that will be the most likely to earn our desired results,” the spokesperson said.