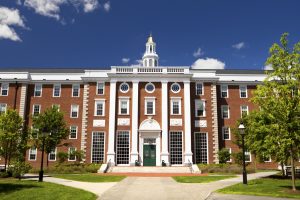 In an op-ed in student newspaper The Harvard Crimson, Taylor, along with students Isa Flores-Jones and Eve Driver of advocacy group Divest Harvard, accused the university’s endowment of taking water from California’s critically overdrafted groundwater basins to supply vineyards it owns.

Overdrafting is when groundwater withdrawal exceeds the amount that is replenished over the long term.

According to The Wall Street Journal, Harvard’s endowment has been quietly buying up thousands of acres of California vineyards in recent years, and the value of those investments has more than tripled to $305 million since 2013.

It also said the university was acquiring land with prime access to groundwater, a resource that has become increasingly scarce along the state’s central coast. It was only this March that the National Drought Mitigation Center officially declared that California was free of drought after more than seven straight years of having some form of drought in the state.

“As California takes its first steps to regulate groundwater in the midst of a worsening water crisis, Harvard’s endowment fund is investing millions into vineyards that pump inordinate amounts of water from California’s critically overdrafted groundwater basins,” the three wrote in the op-ed. “According to local farmers, many of whom see their own wells going dry, the University’s projects are doing further damage to the groundwater system as these communities grapple with developing state-mandated groundwater sustainability plans.”

The op-ed also said that rather than “respectfully” engaging  with the community, Harvard sent in high-priced consultants to “blur water boundaries” so that its vineyards can be fully supplied. They said the university had even attempted, albeit unsuccessfully, to get out of local requirements to conduct environmental impact studies for its planned reservoirs.

The three said the endowment’s “rapacious land and natural resource investment strategies” were not limited to California, and that the university has been “grabbing lands from indigenous communities, cutting down forests, and depriving rural people of access to water around the world for years.”

They also criticized the endowments investments in Brazil, where they said Harvard has bought approximately 750,000 acres of land over the past decade in the Brazilian Cerrado, a biodiverse savannah.

“Harvard’s farm companies have conducted massive deforestation to plant soybeans and other export commodity crops, which have virtually no benefit for local residents impacted by the destruction,” said the three. “Recent investigations also found that the traditional people occupying much of these lands were displaced by fraud and intimidation.”

According to Harvard Management Co.’s sustainable investing guidelines, the firm works closely with its managers and operators to support “sound agricultural/forestry practices,” and “look to meet or exceed all environmental standards and labor regulations.” It also said it monitors each farm individually through a detailed management and governance process.

“We believe that ethical conduct, responsible stewardship of the environment, and respect for those with whom we do business are essential to the performance of our farmland and forestry investments,” Harvard Management Co. says in the guidelines. “Challenges to long-term farmland and forestry—including water scarcity, deforestation, poor soil quality, land grabbing, and human rights abuses—require strong partnerships with local managers and operators to mitigate risks.”

In May of last year, Taylor, who is co-founder and CEO of Beneficial State Bank, resigned as a member of Harvard’s Board of Overseers to protest the university’s failure to address what she said are unethical investments by its endowment, particularly in fossil fuel companies.

“We call upon Bacow, an esteemed economist, to direct N. P. Narvekar, HMC’s CEO, to forge a new direction for endowment investments,” the three wrote in the op-ed. “Harvard should consider its own faculty’s assessment of the real environmental, cultural, and local impacts of its investments. That view alone would call for divestment from water, land, and energy holdings.”