The Oregon Public Employees Retirement System (PERS) has decided to keep its assumed rate of return at 7.2% until 2021.

The board revisits the topic every two years. Until its meeting, held Friday, it had been gradually reducing its assumption due to lower returns —specifically in its bond portfolio, reports Oregon Live.

The Oregon pension fund’s decision came amid long-term return forecasts from consultants and Milliman, its actuary. Callan, the plan’s consultant, predicted 7.32% returns over 10 years, compared to a survey of 34 investment adviser outlooks based on specific asset classes. 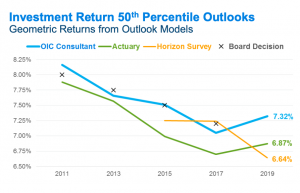 In the survey, respondents estimated that they would accrue 6.64% over the same timeframe, meeting materials show. Milliman was somewhere in the middle, suggesting 6.87% returns for the retirement system over a 20-year period.

“Based on the capital market outlooks modeled, we believe the current investment return assumption is reasonable,” meeting materials said. “However, the PERS Board should give consideration to reducing the assumption out of acknowledgement of the uncertainty of future outlooks and the variance of single point-in-time measurement models such as those discussed above.”

Actual performance, however, has been closer to the consultants over the five-year period, returning 6.5% annually. The 10-year duration has been kinder, with 10.2% returns, but it is not counting the fund’s 26.75% loss in 2008, according to Oregon Live. It returned 7.9% year-to-date.

The fund will also keep things the same because it doesn’t want its liabilities to balloon further under lower rates. The plan owes $27 billion to its members, and although those liabilities will accrue regardless, a cut would only increase the amount of money owed to retirees more quickly.

“We would not recommend increasing the return assumption at this time, given the uncertainty in future outlooks and the influence of the point-in-time measurement at year-end 2018,” the fund’s materials said. 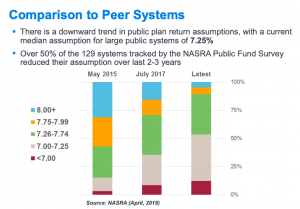 Public plans have been reducing their assumed rates over the last several years as less-productive investment results are becoming more and more expected. More than 50% of the 129 retirement systems tracked by NASRA’s 2019 public fund survey have reduced their assumptions in the past two to three years, Oregon PERS’s board agenda shows. Most are in the 7.26%-7.74% area.