Oregon Investment Council (OIC) Chief Investment Officer John Skjervem defended the fund’s practices of paying millions to private equity fund managers to any potential skeptics who may be inclined to criticize the behavior.

Skjervem was reviewing recent performance figures generated by the OIC’s fund managers, where private equity was the highest by a considerable margin. 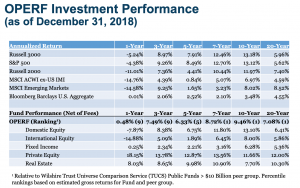 The $72.5 billion OIC remains active in the private equity space, and just recently approved a $500 million commitment to Blackstone Capital Partners VIII, which was on top of $850 million in existing commitments across Blackstone funds to date, with the partnership dating back to 2011.

The council is overweight to private equity, having a 17.5% target to the class but an actual allocation measured at 22.1%. The portfolio is valuated at $16.04 billion as of the end of last year.

Skjervem joined the OIC in November 2012, after serving over 21 years at Northern Trust as its senior chief investment officer.