US-based foundations are investing a surprisingly small amount of capital to real estate, according to Preqin.

The firm’s data showed foundations made up 28% of US-based real estate investors, but represented just 2% of total invested assets.

More than two-thirds of foundations allocated less than 5% of their total assets to real estate, Preqin said. Some 28% invested between 5% and 9.9%, while just 8% allocated more than 10% to the asset class.

Endowments exhibited similar figures, Preqin found. While they made up one-fifth of total real estate investors, they accounted for only 6% of total allocated capital. 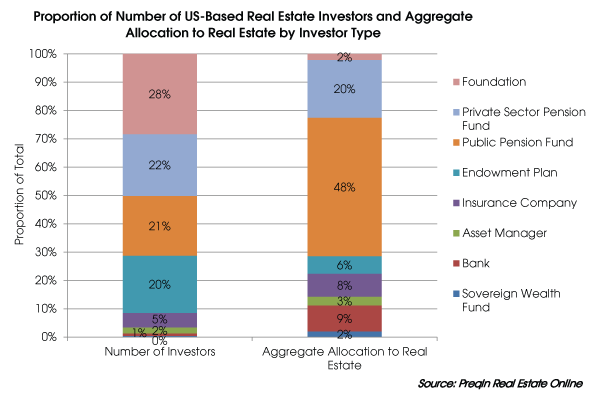 These disproportionate allocations paled in comparison to pension and sovereign wealth funds.

According to Preqin, only 21% of real estate investors were public pension funds but they represented nearly half of aggregate allocation to the asset class.

Just seven sovereign wealth funds also collectively made up the same proportion of capital invested in real estate as foundations.

In a previous report, Preqin found some 77% of sovereign funds currently allocate up to 9.9% in real estate and 93% have a target allocation of between 5% and 14.9%.