That is the advice—make like an undercover cop in college—I get from Komson Silapachai, investment manager at Teacher Retirement System of Texas, as we walk into my first class since graduating two and a half years ago. Too late: My grown-up pants and audio recorder give me away.

The course: Titans of Investing at Texas A&M University’s Mays Business School. The lesson: “The rise of the energy complex and transformative business practices.” The professor: Britt Harris, Texas Teachers CIO and most certainly a titan of investing.

So what would college students know about energy investing and why would they even be interested?

Only five minutes into the class—packed with 19 students, five alumni, and a professional videographer—and I’m proven wrong, wrong, wrong. One class-wide “Howdy” and an opening piano act later, the Aggies get deep in the weeds of Fed Chair Janet Yellen’s views on interest rates and emerging markets’ October currency rally. Their slides would please a Goldman managing director; Silapachai and I stare at each other in awe. (In college, my understanding of currency was the $4 in my wallet.) We’re taken through the Kremlin’s response to the Ukraine bailout and demographic implications of China revoking the one-child policy, only to land on the philosophical question: “How much is enough?” 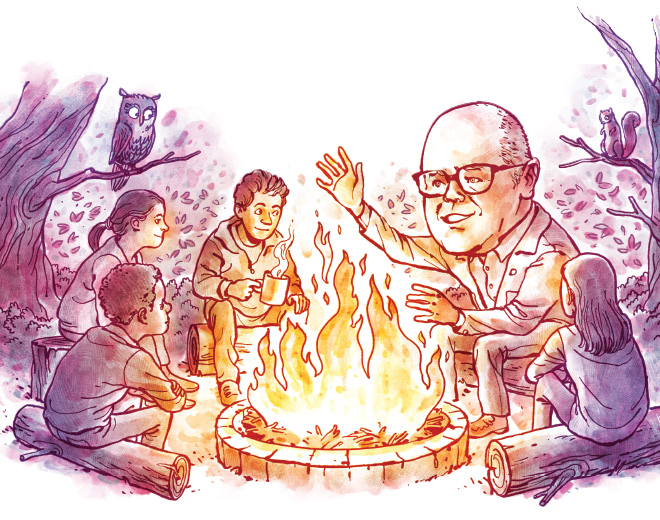 Art by Kyle T WeberThis is Britt Harris’ class, after all. After quoting British philosopher Bertrand Russell, the Texas Teachers CIO alights the podium for a lesson on his five treasured F’s: Faith, family, friends, fitness, and finance. “I’ve had the fortune to make more money than expected,” Harris begins. CIO’s 2013 Lifetime Achievement honoree spent much of his career in corporate pensions, had a brief stint at Bridgewater Associates, and is now eight years into his tenure at Texas Teachers.

“How much is enough? Money is a wonderful servant, but a ruthless master,” he cautions. “When I asked other wealthy people how much was ‘enough,’ they all looked like deer in headlights. They said, ‘It must be more than what I have now. I feel like I have to make more.’”

That was a tipping point for Harris. When he joined Bridgewater in 2004, he felt he had reached the end of his professional Act I, and was entering the second. His life was no longer about succeeding. Rather, lasting significance was the goal. This realization ushered a move back to Texas, his home state, and to A&M, his alma mater.

“I didn’t want to teach a class that already existed,” Harris says. “This class is about investing, but also a lot about wisdom. I want these students to become fully engaged humans when they go out into their professional fields. Even our selection process takes that into account. To become a Titan, students must have the potential to become successful early on in their careers, be likely to use that success to do something good, be an interesting person, and like to eat.”

Titans delve into the nitty-gritty of finance, investing, and business—What is a hedge fund? How has horizontal drilling changed oil markets over the last decade?—but also hear about life as an analyst on the hallowed floors of JP Morgan and Goldman Sachs. Younger alumni return as guest speakers. They too offer guidance, advising current Titans to “be deep learners, and manage your expectations. You will be working 14- or 15-hour days, mainly to make your boss look good. But always think critically about your projects. You should be prepared to have an opinion, in the one-in-a-million chance that your boss asks you for it.” Legends such as Bridgewater’s Co-CIO Bob Prince and Oaktree Capital’s Co-Founder Howard Marks have also visited College Station to impart wisdom.

One decade and 300 Titans later, the program is thriving. Titan graduates can be found at private equity firms (KKR, Blackstone), consulting firms (Bain, Deloitte), investment banks (JP Morgan, Barclays), and businesses all over the world. Harris recruits interns and investment staff for Texas Teachers from Titans. (For instance, my host Komson Silapachai was Titans III). Harris’ two sons belonged to Titans Classes XI and VI. “We’re not Harvard,” the professor acknowledges. “A&M didn’t always have a strong connection to finance. But now, I’m proud to say Titans have made it into some of the most exclusive institutions.”

The formal section of the class winds down after Harris’ lesson on the differing levels of knowledge (simplicity, complexity, despair, and arrogance). Next on the Titan agenda: Fajitas at the CIO’s house on the edge of campus. Sitting around the fire pit outside, Harris banters about oil, the next Aggies football game, and an upcoming Titans reunion dinner in Houston. It’s clear he’s not the only investing heavyweight warming by the flames—just the most experienced.

“You can tell this is what makes him happy,” Silapachai reflects. “Britt has 300 protégés that he sincerely cares about. He’s building the next generation of investors from the ground up.” Part guidance counselor, part CIO, part pastor: Britt Harris has found his second act.